"Berlusconi is incompetent, vain and ineffective as a modern European leader, a leader physically and politically weak leader, his often long nights at parties mean he does not rest enough."
Not to mention the political weakness of Medvedev compared to Putin, the servile relationship between our Prime Minister and the latter, the mafia in Russia, the U.S. aversion against Sarkozy and Ahmadinejad…
Sorry… but where the sensational revelations by Wikileaks are?
I hope - from a purely intellectual point of view - that in the coming days something more original will come out.
On the other hand, it is interesting to observe the reactions by Berlusconi’s politicians to the recent publications by Wikileaks.
I read the considerations by Minister Frattini and La Russa, Capezzone, Gianni Letta and I also learned that Berlusconi laughs.
So, exploring the web, I got yet another scoop!
It seems that Silvio’s loyalists want to punish Julian Assange.
I also have my secret sources and I am proud to publish the home page of the beta Berlusconi’s site anti Wikileaks, coming soon: Weeklylicks… 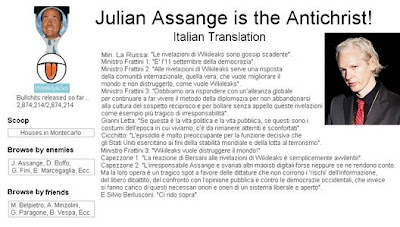 The News: Wikileaks, here are the documents.