Berlusconi speech to the Senate: the real deal…

December 13, 2010
Stories and News No. 288
Between today and tomorrow a great part of Berlusconi’s present and especially future are on the table.
Our whole country does too, given the state of dependence we are by the power of the Italy Premier.
The Prime Minister spoke for about half an hour and, as usual, has said many things.
One day I read somewhere that when the man of power is speaking in public, there is always someone in particular who are sending his own words.
Even if we listen to an institutional and ecumenist monologue, there is always a preferred destination.
In my humble opinion, the meaning of Berlusconi’s speech to the Senate is reduced to his invitation for a deal.
Who is this invitation to?
The Story:
"Honorable senators, as you could hear, as you can see, our position is clear, and at this point who has more responsibility have to show it. For my part, I consider as my responsibility not to overlook any possibility of dialogue with the opposition. It is my responsibility rebuild and renew the alliance of all moderate forces that were at the root of our political commitment and are today, as well as the People of Freedom, in the Northern League, and in Gianfranco Fini’s Fli, in the Udc, the unity of the moderate Italians. This historical and political context is the most precious fruit of this phase - let me emphasize this - ten years of my personal and political commitment. The unity of the moderate Italian heritage is priceless and no one can be so irresponsible as to voluntarily or involuntarily destroy it. We must never forget that the people of the moderates are a truly united people who share the same values and vision of the future, which shares the same vision of freedom, the human person, home, family, work and enterprise. When we talk about the future of the moderates, we must always remember that the people of the moderates are the first, our men and women are our first, the parties and their leaders are only after. In a democracy the people choose the leaders and not the leaders choose the people. I am convinced that the difficulties and divisions that have arisen are by no insurmountable means. The common sense and a sense of proportion must return to prevail. This is what the people of moderates ask us. They don’t call to divide us: they ask us to unite for the good of Italy. To all the moderates in this House I propose a pact to the legislature to ensure consistency and continuity with the election program and shared with the choices, renewing the program and the structure of government. We decide together the way and what the most appropriate tool is. Honorable senators, today we are not discussing the person of the Prime Minister, today we are dealing with the choice between the continuation of a project change and the restoration or return back, the return to those traditional vices of politics that are causing problems that Italy now suffers. Our country needs stability and governance, essential to the achievement of those reforms that are urgently needed. Ensuring stability today is the first condition to secure the interests of the country and seek to build the moderate area. If the government gets confidence from tomorrow we will work for this purpose, to redial the moderate area, as far as possible to enlarge the current majority to all those who share the values and programs of the moderates, those who rely on the strongest political force in Europe, the great family of democracy and freedom that is the Party the European people. We will also work to strengthen the government team and I firmly believe that finally the reasonableness and the responsibility ever win over the unreasonableness and the irresponsibility. I am convinced that the common good always prevail over selfishness and this is the reason why - I think – we will go ahead and continue to work in everyone's interest. If this does not happen I am sure that when the time comes, the Italian people, from which this government and this majority had a clear mandate and a full entitlement to drive the country, will evaluate the merits and justice, common sense and responsibility."
Then the fundamental questions:
Who really are the moderate people Silvio is speaking to?
Who are the moderate people who share values such as family?
Who are these moderate people that ask Berlusconi and his allies to remain united?
I can think only a word and it also starts with letter m.
You know, they asked Giulio Andreotti’s Christian Democrats the exact same things… 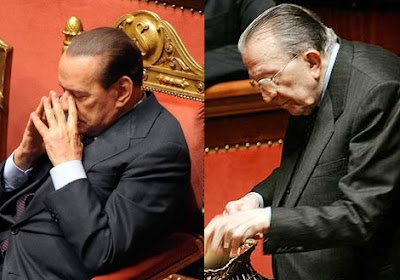 The News: Countdown to the confidence vote: the Premier speaks in the Senate.
Stories and news: “invented” Stories, fruit of my imagination, inspired by “true” media News.