December 14, 2010
Stories and News No. 289
In the end everything is accomplished.
Berlusconi and his friends survived by three crucial votes.
In detail, while 311 votes were for the no confidence motion, 314 deputies remained loyal to the premier.
Loyalty is a valuable quality in a party built around an absolute leader.
Until you prove to be loyal you are in, otherwise you are a traitor or worse.
For my part, I am convinced that this famous December 14 did not reveal anything new.
The only real response that I was waiting for was the Constitutional Court opinion on the legitimate impediment immunity law.
There Silvio risks much more than a confidence vote.
Since it has been moved to January 11th, my expectations towards the outcome of these votes are dropped dramatically.
I think that the demonstrations of total rejection and condemnation of thousands of people who have taken the streets today all over Italy are much more significant... 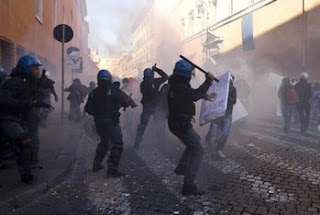 However, I ever dwell with great interest the reactions of the media and the protagonists in front of the events.
Above all, I am struck by this accusation of vote-buying by Berlusconi.
One of the Democratic Party leader, Massimo D'Alema - I had forgotten that he was still here… said that the government won by 3-4 vote buying.
I am not in agreement.
Only 3-4 votes?
What about the other 300?
Have they voted confidence to Berlusconi because they love him?
That was because they appreciate him?
Did they trust him?
Furthermore, where D'Alema’s evidences are?
Well, I say without fear of contradiction that Berlusconi paid and I'll show you here…
The Story:
Once upon a time there was a rich man.
I do not explain where he took the money.
I tell you one thing that my grandmother often told me.
A man becomes rich in two ways: he is a person with exceptional skills and talents or…
Or.
The rich man who became rich thanks to this or, having no exceptional skills and talents, was accustomed, indeed, was forced to pay to get what he wanted.
He always did.
Did he want to own a television?
He paid.
Did he want to have two?
He paid again.
Did he want three?
He paid more.
Did he want them to remain three?
He paid much more.
But there was also what he did not want.
Did he not want to be criticized?
He paid, and many were promoted as many purged.
Did he not want to go to jail?
He paid to create a party.
Well, otherwise tell me how the hell a man might create a party that on the same year of birth wins the election without spending a penny.
Did he not want to be prosecuted?
He paid the party - and not just his – to keep him away from the courts.
Then the counting day came.
His opponents wanted to know how many were still with him.
"Ever one more of yours," he replied smiling.
This is what happened, and not for one, but three.
Did he pay?
To be precise, he was not obliged to open his wallet.
It was enough to not close it.
Otherwise, what would he have done in his life?
A singer on the boats?
Yet, there were so many treasures that the rich man could never buy: disinterested trust, sincere admiration and unconditional loyalty.
To get rid of him we have just to find people who deserve it… 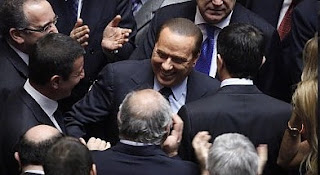 The News: The Day of the confidence vote.
Stories and news: “invented” Stories, fruit of my imagination, inspired by “true” media News.