December 01, 2010
Stories and News No. 281
Let's start with a resounding clarification.
A huge number of newspapers, TV news and websites say that Interpol had issued a warrant of arrest or capture for sex crimes against Julian Assange, spokesman and editor of Wikileaks.
That is false.
If the authoritative media, unlike the braggart Wikileaks, had bothered to visit Interpol website would have read on the top of the Wanted page that the Red Notice on Assange is not an international arrest warrant and the person should be considered innocent until proven guilty.
The arrest warrant came from the Office of the Prosecutor of Gothenburg, Sweden.
Interpol merely reports such request to all its offices worldwide.
In other words, that is a service of spreading the warrant from Sweden, following the individual rules for extradition of the various countries.
But let's move on.
While the pseudo revelations about the botulino of Gaddafi and Berlusconi parties have filled the front pages of international media, the not embarrassing, but incriminating documents were ignored, as those concerning the espionage action of the US State Department against the United Nations.
The State Department leaded by Hillary Clinton, the reasons why Assange calls her immediate resignation.
So I asked to myself: if the documents were authentic, Clinton should respond? Or maybe she is innocent, not aware of the facts?
While I was making me these questions here is that the lady has confessed…
The Story:
Hillary Clinton: "The United States highly values the relationship that we have with the prime minister and with Italy. We have no better friend, we have no one who supports the American policies as consistently as Prime Minister Berlusconi has, starting in the Clinton Administration, through the Bush Administration, and now the Obama Administration.
Whether it’s on Afghanistan, where he has stood with us and provided unstinting support, or the work that he and President Sarkozy and others have done in Europe to try to stabilize the situation in Georgia and on so many other matters, the United States, Republican and Democratic administrations like, know that they can count on the prime minister to support the policies and values that Italy and the United States share in common."
Better friend? Berlusconi?
Consistently? Berlusconi?!
The values that we share in common? With Berlusconi?!!
Clinton is guilty without doubt! 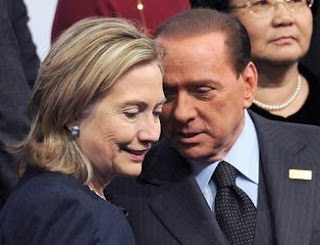 The News: Arrest Warrant for rape to Julian Assange.
Stories and news: “invented” Stories, fruit of my imagination, inspired by “true” media News.