Minister La Russa, the fascist and the coward

December 17, 2010
Stories and News No. 292
Last night Italian political talk show Annozero has shown once again what kind of people are governing my country.
While I saw an angry and foaming at the mouth middle-aged man ranting against a guy that could even be his son – I do not wish him that, and I remembered for a split second that he was the Italy Minister of Defense, I immediately felt the desire not only to be in another part of the world, but in another time too.
So I imagined me twenty years in the future, watching with my kids a terrible video of one of the worst periods of our history and hearing their question: "Daddy, how did you send such man to the government?"
The thing that gnaws at me is that I will endlessly repeat that I have always voted against.
For him it was my government, as it happens today in the rest of the world.
Well, I think that the wise sofa’s teachers may know why so many people are mad here…
The Story:
Once upon a time there was a fascist and a coward.
The fascist was really a fascist.
And when I say fascist, do not be smart saying fascist as Indro Montanelli…
Come on...
A fascist is a fascist.
If the communists are all communists, the converse is true, isn’t it?
Be consistent.
What did it prove he was fascist?
First of all, he had the face to publicly admit it.
Of course, if he had lived in a country where there was the crime of glorification of fascism,
he would have been prosecuted.
I think there was, but maybe something has changed.
Nevertheless, his statements were irrelevant, because he was a fascist even being stationary.
He did in the angry look, for example.
In the sense of canine look, I mean.
You know, anger is often a noble sentiment, when it comes from honest indignation against a manifest injustice.
Wait a minute: I think even a dog can be capable of such emotions.
Let's say angry for reasons far from noble.
Indeed, for no reason.
His was a dull anger.
Add to this a total incapacity to comprehend outside ideas and talk.
It was not just a mere dissent.
To dissent means understanding, even not sharing.
No, the guy had only one idea in his head and had no way just to accept others, let alone understand them.
From which more anger, frustration and rashly anger.
And how does such a person relate to the next people?
He had no other way than using all the power in his hands to impose on others his reasons, if we may so call them.
If anyone, very human reaction, tried to respond that anger transformed into violence.
About the coward I have little to say.
The coward was simply a coward.
On this there was no possibility of manipulation.
That is, he could not say to be as cowardly as… and pulling out some famous name.
Until proven otherwise, the cowardice has never brought a great reputation.
Why was he a coward?
That was because he had no courage.
I am talking about the courage to express his ideas everywhere and not just hidden by a constitutional position; the courage of apostrophe opponent face to face in the public square, alone and without the support of policemen; the courage, then, to look in the mirror and admit his misery, physical and intellectual misery.
When that will happen, the two will realize they are the same person… 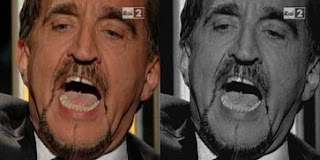 The News: Minister La Russa argues with a student on TV.
Stories and news: “invented” Stories, fruit of my imagination, inspired by “true” media News.