December 07, 2010
Stories and News No. 285
On the home page of all media in the world there is only one article: Julian Assange was arrested.
If the English judges will be in favor of extradition, Assange will have to answer a charge of rape in Sweden.
Whatever you think about him, in relation to the really serious content broadcasted by Wikileaks - confused by some smoke as Gaddafi is redone, I invite you to very carefully watch who will rejoice with greater vehemence.
"It’s about time," Italy Foreign Minister Franco Frattini excitedly exclaimed. "The international encirclement fortunately was successful. Assange hurt the international diplomatic relations and I hope will be interrogated and tried as established by law. "
I agree with Frattini on one point: if someone hurts and is suspected of a crime has to be questioned and prosecuted according to law.
Well, I know a friend of Frattini…
The Story:
Once upon a time there were Julian Assange and a friend of Frattini.
They had some things in common.
Both were known worldwide for their sensational behaviors and actions.
These sensational behaviors and actions were able to divide public opinion.
As Assange, also the friend of Frattini was found frequently on the grill for his frequent sexual relations.
However, the differences between the two were many more than the similarities.
Assange was committed to publicly disclose challenging the great powers documents.
Frattini's friend was tremendously committed to silence anyone had revealed such documents, unless it was the power of his opponents.
In that case he would have published so many documents that Wikileaks would have not got enough space to host them.
In 2009 Assange received the Media Award from Amnesty International for his excellent work as a journalist in favor of human rights.
The following year Frattini's friend declared that in his country there is too much freedom of the press and I said it all.
Let us arrive to the recent history.
Assange is ahead in the poll on who will be elected 2010 Person of the Year by the famous Time magazine.
Michael Scherer wrote last Friday on the Time’s Blog a post describing Frattini’s friend as a small man.
However, the most important difference between the two the following.
Assange, though reluctantly, went to police headquarters to be questioned and face charges against him.
Just to hope of seeing the friend of Frattini responding to one of hundreds of charges against him we have to wait until December 14.
And there is nothing sure about that… 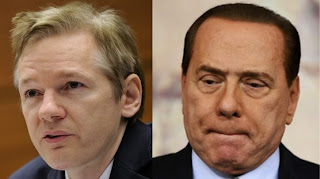 The News: Wikileaks: Julian Assange was arrested in London.
Stories and news: “invented” Stories, fruit of my imagination, inspired by “true” media News.