Berlusconi has a girlfriend?! He is gay: another evidence

January 17, 2011
Stories and News No. 301
"Since I am separated - but I never wanted to say to not expose her at the media, I had a stable relationship of love with someone who obviously was very often with me on those evenings and that certainly would not have allowed that happening to dinner or after dinner, those absurd facts that some newspapers have speculated on."
...
Excuse me... even now that I have read and watched twice the video message by Berlusconi to his promoters of freedom, I can not write without falling off the chair by laughing.
Sorry, but is there in Italy or better still in the world, today, a greater comedian than him?
Guys, I'm serious, this is the stuff of a true professionals of laugh.
The most important thing to make laugh is the sense of rhythm, the ability to surprise and to unsettle the audience suddenly.
He is a professional artist, without jokes.
However, since even behind the least witty gag there is a not laughable truth, our premier, with his umpteenth show offered me a further proof that he is gay - to be added to the list I drafted some time ago on this blog, which I explain in an entire decalogue…
The Story:
The gay’s girlfriend
1. The gay’s girlfriend: nobody knows who she is.
2. The gay’s girlfriend is a shy person: so no one knows her except the gay.
3. The gay’s girlfriend comes out always as an alibi.
4. The gay’s girlfriend could also suddenly appear in two cases: if the alibi does not resist or when the gay must be tried.
5. The gay’s girlfriend: many would be her if the gay is full of money.
6. The gay’s girlfriend can be you: take look at the auditions on the Mediaset Casting!
7. The gay’s girlfriend should be a patient girl: sooner or later the check arrives.
8. The gay’s girlfriend might not even need to appear: in some countries there are so fool people that the gay’s word is enough.
9. The gay’s girlfriend is a woman of great values: the evening she goes to bed early, that’s why she does not remember what the gay did after dinner.
10. In summary, the gay’s girlfriend exists only in the imagination of the gay and who loves to be cheated…
PS: I say sorry to all homosexuals I involved once again in this ridiculous farce called Italian government. 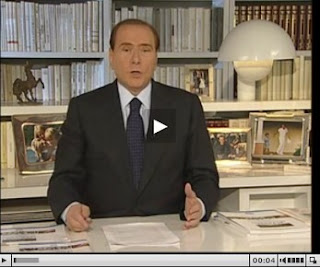 The News: Ruby Case: The investigation on Berlusconi today in the Chamber of Deputies.
Stories and news: “invented” Stories, fruit of my imagination, inspired by “true” media News.