January 27, 2011
Stories and News No. 309
After this post, do not tell me that I am not unbiased.
When it comes to even recognize the merits of those who I usually disapprove of, I do not hesitate.
Though reluctantly, I must admit my sincere admiration for the article published today by Il Giornale, Berlusconi’s newspaper.
The title is evocative: "Private loves of Boccassini".
The clever article is pretty much focused on a brilliant scoop on the prosecutor Ilda Boccassini, part of the court of Milan, between the accusers in the recent investigations on Italy Prime Minister.
In the work, we read about a murky past.
In fact, that's incredible, in 1982 - twenty-nine years ago – Mrs Boccassini was seen in love attitudes with a communist journalist!
So the contradictions of the magistrate are obviously highlighted, since she is guilty today to rummage in the private life of Berlusconi.
She shows a double morality, in fact.
This is journalism, I must admit.
But my opinion counts for little.
Apparently, the ability of the editorial staff of Il Giornale has not ignored by the U.S. experts and seriously affected by the now legendary Boffo Method, they decided to award them with the Pulitzer Prize…
The Story:
Motivations:
For the ability to do journalism as none in the world does.
For the creativity in finding new ways to favor.
For the effort in finding new reasons to defend newspaper’s owners.
For the nerve to go around telling to be free to write what you want.
For fairness in punishing anyone who dares to criticize the newspaper’s owners.
For the courage to publish news that nobody, but really, no one would dare even to think, let alone publish them.
For the amazing imagination to distort the facts in order to sell an extra copy.
In addition, a special mention for the Boffo Method:
A concrete demonstration of how powerful and enlightening the press is, if you put in the hands of those who are willing to write anything to achieve their goal.
For all these reasons,
we are proud to offer the Pulitzer Prize to the Editorial Staff of Il Giornale.
PS.
We forgot the section of the award, that is new this year:
Newspapers and journalists who unworthily bear this name.
(Because a slave pen is never worth reading...) 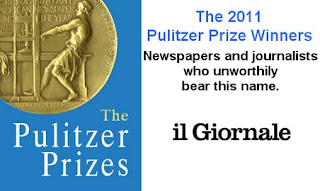