January 28, 2011
Stories and News No. 310
If I had not the faintest idea of the country where we live today and, above all, what kind of people are governing, I would almost always see news as hoaxes.
In other words, instead of a state whose image is daily degraded by his so-called leaders, we would live in a nation led by a band of wags, dedicated to do everything to give a laugh to the people.
So, abroad people would say: Italy, what a friendly country, where the joy rules and the jokes go around.
The problem is that the fact I read this morning does not seem to be a joke: Berlusconi’s People of Freedom are preparing a manifestation for 13 February 2011 against the judges who are guilty of attacking Silvio Berlusconi.
Look, I sincerely hope that this may soon be denied, otherwise, once such a joke will travel around the world, a hard to forget in the near future laughing will rise up.
However, regardless of whether the grotesque initiative will be confirmed or not, I went around the web in search of the first signers.
These are excellent names.
People who, as Silvio, would like so much a world without laws and judges…
The Story:
Al Capone
Bernard Madoff
Imhotep
Saddam Hussein
Captain Barbossa
Professor Moriarty
Norman Bates
Gordon Gekko
Vito and Michael Corleone
Michael Myers
Lex Luthor
Chicks Hicks
John Dillinger
Castor Troy
Ernst Stavro Blofeld
Keyser Soze
Bill
Jason Voorhees
Alex De Large
Jabba the Hutt
Chucky
Sadako
Uncle Scar 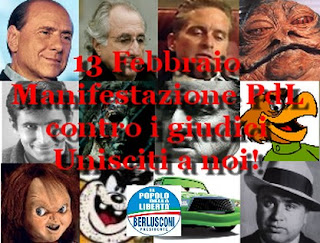 The News: Berlusconi leads the PDL in the streets against the judges, Feb. 13.
Stories and news: “invented” Stories, fruit of my imagination, inspired by “true” media News.