January 25, 2011
Stories and News No. 307
Now he starts to be depressing.
Could you imagine him?
A seventy-four old man, sitting in a chair with the blanket on his legs, which makes zapping between TV channels in search of talk shows that say bad things on him.
Then he phone calls and tries to intervene.
I know it is a sad image for prime minister, but this is the reality.
That is a miserable story.
For this reason, I need to laugh about.
Many do not know - here's the new scoop - that Berlusconi, before calling Gad Lerner’s talk show last night, he got the wrong number and called a family like many others.
Since he had prepared the speech, before realizing the error, Silvio started to speak…
The Story:
"Hello?" Paolo said, ten years old.
"Good evening, they called me to tune on TV…"
"Hello?" the child repeated. "Who speaks?"
"I'm seeing a disgusting talk show!"
Mario, redundancy worker, takes the handset.
"Who is?" the man asks.
"I saw a despicable, vile, repulsive hosting..."
"Who is?!"
"I heard false, opposed to reality, far from the truth, and distorted arguments..."
"Who are talking?" Mario's wife asks. She is unemployed, now surrendered.
"I do not know," the husband replies, "maybe they want to sell me something: we don’t buy anything!"
"I saw a contrary of the truth representation of reality!"
"Hello?" Luisa says, succeed the husband.
"I know what I'm saying, you did not."
"Who speaks?" the woman exclaims angrily. "What kind of joke is this?"
"You have hurt Ms Nicole Minetti!"
"We? But who knows this Nicole Minetti?!"
"Who the fuck are you?" Mario screams, getting back the handset.
"Nicole Minetti is a wonderful person, smart, prepared, serious, she graduated with honors, cum laude…"
"And who cares?!" the husband replies.
"She paid her studies with her job."
"Lucky her! My daughter works at a call center. At best, she charges the phone and gets gasoline to scooter…"
"She is English mother tongue and plays an important and appreciated working with all international visitors to the Region. She worth much more than many of the so-called ladies there…"
While Laura, his daughter approached curious, Mario loses his temper: "Hey, but how dare you?! The ladies here are Italian mother tongue and have nothing to envy to this Nicole Minetti…"
"The prime minister had never relations except friendship and respect for her and his other guests…"
"Who? The prime minister?! Fuck you!"
After abruptly stopping the call, Mario turns and the whole family applauded him warmly.
"Let's back to eat before the dinner is cold”, the man says. "There's people out there who have nothing better to do..." 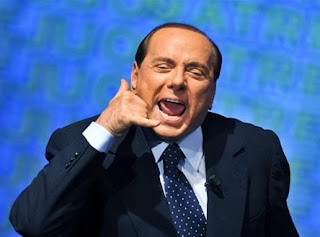