January 31, 2011
Stories and News No. 311
D'Alema and Berlusconi. Berlusconi and D'Alema.
Do you know something about the bicameral in 1997?
It was a horrible so much prophetic type of mess between Mr. D'Alema and Berlusconi, proposed by the former.
As time goes on, isn’t it?
That is, time passes, but the thirst for mess-ups by the two brilliant statesmen is never satisfied.
In my humble opinion it is an absolutely not random fact that we have today two similar interventions on Italy press.
D’Alema, current president of Copasir, in an interview with La Repubblica, in anticipation of early elections makes an appeal to an ideal grid, which comprehends Democratic Party Fini and Casini’s Terzo Polo, the Italy of Values and the radical left, proposing to voters a government of national responsibility.
At the same time, Silvio, the nephew of Mubarak’s best friend, writes a letter to the Corriere della Sera and proposes to the leader of the Democratic Party Bersani a bipartisan plan for the Italian economy.
Now, it happens that according to the recent survey by Luigi Crespi - far from being a detractor of Mr Berlusconi –the voting intentions of the Italians show a decline in confidence in Silvio about four points while 42% are undecided, higher than the number of centre-right and centre- left electors.
Undecided people…
That is a way to define them.
Another is people who are tired of this shit, if you'll pardon the style fall.
What do the undecided people think about the two proposals?
I tried to synthesize them (if possible) and asked a so-called undecided guy’s opinion…
The Story:
Silvio Berlusconi Proposal (summary):
The alternative is between a "dry blow", unjust and ineffective in the long term, and so depressing for any prospect of private investment and undertaken, and the biggest whipping the horse economy in Italian history memories.
We need a much clearer economy, this is the whipping which I speak of, in a country more stable, less quarrelsome, and confident and even in love with itself and its future. The dry blow is a waiver of state, cultural reactionary to move forward on the road liberal. To Bersani I propose to act together in Parliament to discuss without prejudice and exclusivism a large bipartisan plan for the Italian economy, a government plan whose centerpiece is the constitutional reform of Article 41, months ago announced by Minister Tremonti, and drastic measures on the market allocation of public property and de-wide taxation for the benefit of businesses and young people.
Massimo D'Alema Proposal (summary):
Here is a real democratic emergency. We go out only with a constitutional type plan, which coincides the conclusion of the cycle Berlusconi with the end of a certain phase of the bipolar and gathers the vast array of forces opposed to Berlusconi: Let’s introduce and ask voters to support a constituent government which has three basic objectives.
First: to solve the problem of political and institutional forms of bipolarity Italian. We are in a plebiscite and populist, built around Berlusconi. We need to finally build a two-party democracy.
Second: The second is a great social pact for growth. We experienced this with the euro, and it was the real success of the Nineties. Today there is much in need. But it can not be entrusted only to the social partners, or can only be paid by either party.
The undecided guy’s opinion:
The undecided guy: What is the Article 41 of the Constitution that Berlusconi wants to reform?
Blog: Private economic initiative is free. It shall not be contrary to public benefit or to harm the safety, freedom, human dignity.
The law shall provide appropriate programs and controls for public and private economic activity may be directed and coordinated towards social targets.
The undecided guy: I see... Another thing: what is the third objective of D'Alema? No, because he talks about three goals and since the first two seem a bit vague…
Blog: Hum… Excuse me, the third... I searched in the article, but I could not find it. Anyway, what proposal among the two do you choose?
The undecided guy: The third one, Revolution! 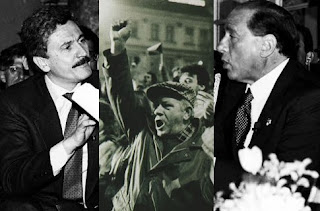 The News:
Berlusconi proposed a bipartisan plan to PD’s Bersani.
D'Alema and the project of great electoral alliance.
Stories and news: “invented” Stories, fruit of my imagination, inspired by “true” media News.