Gianni Alemanno, the Rome mayor who fires the others when he mistakes

January 11, 2011
Stories and News No. 297
Do you know Gianni Alemanno, the mayor of Rome?
Well, I know him because I live in the Italy Capital city, but maybe you have heard about through the newspapers.
Alemanno… the man who is in the middle of the scandal Ama, Atac and all the patronage of Rome…
Come on, the guy that, in the recent poll on the popularity of our Italian citizens, is 73rd, losing 50% of the rating of the previous year.
Well, I read that thanks to these excellent results, he has decided to clear the city council.
Berlusconi’s Government approves: "We have previously agreed with the decision taken by the Mayor Alemanno to reset the council, to restart it," Mr. Cicchitto, the leader of the PDL in the Deputies Chamber, said.
Sorry, but there is something that escapes me.
And it is not a trivial point.
That is a question of logic, the simple logic of events.
Who knows, maybe the following story will help me to better understand the meaning of everything…
The Story:
Once upon a time there was an illogical land.
The rest of the world had its own logic.
Not perfect, but there was a minimum of consistency.
For example, in Kenya, the Minister for Industry resigned on corruption charges in a scandal of imported cars.
Only for charges, there was still no condemnation.
In the illogical country, however, something else happened.
Let us take one at random.
The mayor of the capital city was aware - and the people with him - that in the management of the city there had been some mistake.
Let's just say big mistakes.
The mayor fired the city council.
Yes, I know, I understand your amazement.
That is like a president that buys a football team, the coach chooses the players and the team looses all games.
What does the coach?
He says that there was something wrong and asks the president to sack all the players and buy new ones.
This comparison does not convince you?
Here is this:
That is like a surgeon who operates on a patient and the latter dies.
And what does the doctor?
He blames the team that passed the scalpel and the various tools and calls for their immediate dismissal.
Don’t like this too?
That is like a cook that prepares a bad dinner in a restaurant and then accused the ingredients.
Can you imagine?
"Let’s clear the pantry! Salt, rosemary and olive oil: go away!"
But this was the illogical land and then everything is okay, albeit in reverse.
That’s why I am even reading about Guido Bertolaso as a possible vice mayor… 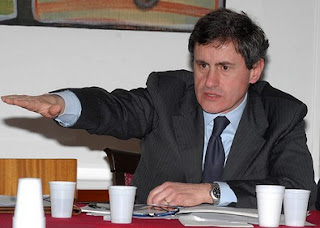