February 28, 2011
Stories and News No. 331
Life is hard for real Berlusconi’s adepts, I have always said.
I am not referring to the opportunist voters, people who vote him being sure that thanks to that they will easy make their dirty business.
I am not speaking even of those who - having as only motivation the idea that the alternative to Silvio is really worse, close the nose, eyes and ears and put the cross under his name.
Well, since leaving the polling station, they moreover shut their mouth, because they never reveal their sin.
Most of the time they say to not vote, Italy politics is all a mess, and so on…
The persons who arouse my interest the most are the promoters of freedom, the convinced fans, the true believers, those who despite the ocean of bad stuff that came out on their idol, they insist in worshipping him.
This is the real species to be studied, much more than the two-headed turtles and the pigs with wings.
Why do I say that the lives of these Italian premier supporters are hard?
That is simple.
First, they have the ocean of bad stuff mentioned above.
I do not believe that to consider the latter only the result of a plot against the Prime Minister is a breeze.
Secondly, I am convinced that he does not help them as I did before.
On his descent into the political field, he spoke much more clearly, he was more direct.
Do you remember? Lower taxes for everyone, safer cities, more dignified pensions and others like that.
This was his strength: speeches in the form of fast, populist and very attractive slogans.
After more than ten years those promises were not kept, but Silvio’s message is now often confused and complicated for his electors.
The reason is evident: Berlusconi no longer speaks to his people.
Three examples of today:
"Because of the phone tapping I have not a cellular…"
"I want to go (to trial), as always, I want to go, my lawyers would not let."
"The Quirinale (President Napolitano) is meticulous about the laws."
In my humble opinion, Berlusconi’s fans are not properly anxious to know that Berlusconi has no longer a phone, what his lawyers are doing and about the meticulousness of Napolitano.
He does not speak with them and they are increasingly lost.
As evidence of this, commenting on the news that this morning Silvio was accountable of contumacy (Contempt of court) on the TV Mediaset trial, here is on the blog the exclusive interview with one of those lover voters, Mr. Franco:
The Story:
Blog: Good afternoon, Mr. Franco hello, let's start with the interview?
Franco: Are you from Annozero? Are you sure? Because they ever change the sense of the things…
Blog: No, that’s not Annozero. This is just a blog…
Franco: What…?
Blog: A website. A site on internet…
Franco: Oh, yeah, Gogol! That stuff…
Blog: Yes… so, I proceed with the questions?
Franco: Go on.
Blog: As you know, today is Mediaset TV trial started again…
Franco: Silvio is innocent, it's all a farce!
Blog: Yes, but let me finish the question: in this trial, the defendant Silvio Berlusconi…
Franco: He’s innocent. It's a shame!
Blog: I understand. As I was saying before, Silvio Berlusconi didn’t go to the trial…
Franco: What trial? He is innocent!
Blog: Okay, I see your point of view, let me finish…
Franco: Silvio is innocent!
Blog: That has already been said. Returning to my question, the trial did not occur. Berlusconi is then accountable of contumacy…
Franco: What?! How dare you? You are accountable of contumacy! Berlusconi is innocent!
Blog: No, Mr Berlusconi is accountable of contumacy means that…
Franco: Do you insist?! Berlusconi is innocent, he is an honest person. He never did this… contumacy.
Blog: No… you didn’t understand the meaning. Besides, don’t be angry with me, the judge declared Berlusconi accountable of contumacy.
Franco: What hypocrite he is! Me too, when I was young, I happened to make contumacy with some girl.
Blog: …
Franco: As I always say, better being contumacy than homosexual.
Blog: Click. 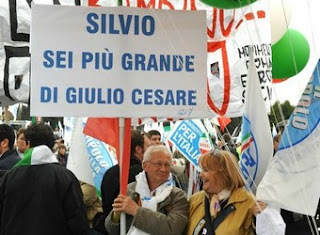 The News: Mediaset trial starts again. Berlusconi was not there.
Stories and news: “invented” Stories, fruit of my imagination, inspired by “true” media News.