February 10, 2011
Stories and News No. 319
Let’s assume.
Let's assume that Silvio Berlusconi and his ministers are not what they really are.
In other words, let's assume that they are not leaders of a government, but a group of actors; a group of comedians, of course.
Now, I challenge you to find a funnier comedy troupe than Silvio’s one.
Mr. B, a prime minister that yesterday said he will sue the Italian State!
I know that many of you have considered it very serious, far from a topic to joke on.
However, I think that underlining the paroxysmal unintentional comedy of Silvio’s People of Freedom does not detract the dramatic image that those who lead Italy today are showing to the world.
In fact, I read that Foreign Minister Franco Frattini - the guy who in 2008 did not join the emergency meeting with other European Ministers to discuss the Russian invasion of Georgia because he was on holiday in the Maldives... - has stated that he is evaluating the possibility to report a violation of privacy (in his opinion made by the Milan prosecutor's office against Berlusconi) to the European Court of Human Rights.
Of course, as it often happens the claims of the minister went around the world and arrived at the table of the President of that Court, Jean-Paul Costa… 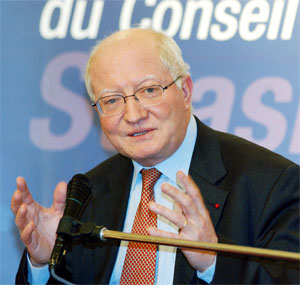 The Story:
The door of Jean-Paul Costa is closed and as usual there are many people outside waiting to meet him.
That is normal when you are head of the European Court of Human Rights.
Those with a minimum of awareness of the world around us know how much there is still to do with human rights.
In the office, the president's personal secretary has just finished reviewing with him the entire list of pending requests.
They are all very serious cases; some with dramatic implications and facts that defining tragedies is highly restrictive.
Mr. Costa is tired, but he does not make it clear.
He knows the importance of the institution that presides, especially for people who consider it a last resort against those who are dedicated to the oppression of the weak ones.
"We're done?" the President says, ready to move on.
"Well... no," the other replied embarrassed.
"Tell me," Mr. Costa invites him.
"There would be a news release. It regards Italy…"
"Come on, talk."
"At first I thought it was a joke…"
"Is it?"
"No, no…"
"I'm listening."
"Mr. President, do you know about the recent trials relating to the Prime Minister Berlusconi?"
"Sure," Costa answers, "all the newspapers of the world talks about it: bunga bunga!"
"Yes", the secretary confirms. "Now, we read that the Italian Foreign Minister, Mr. Frattini, intends to refer a complaint for privacy violation by the judiciary of his country…"
Mr. Costa remains forbidden for a moment.
"Excuse me, but what Court?"
"This court…"
The president stays perplexed: "But who is the violated privacy of?"
"The Prime minister Silvio Berlusconi…"
Mr. Costa stands for a long time without words.
So, looking very serious, he searchs around Youtube, just move the PC monitor to the secretary and says: "If this request were to come, send the following video as a response…"
The News: Frattini did not exclude recourse to the Court on Human Rights: privacy violated in the Berlusconi Ruby case.
Stories and news: “invented” Stories, fruit of my imagination, inspired by “true” media News.