Federalism stop: elections or Bossi and Maroni are incoherent

February 03, 2011
Stories and News No. 314
I assume the following premise is indisputable for all.
If you vote right or left, the centre as the furthest point of the parliamentary arc, coherence is a fundamental value.
I say fundamental to the voters, of course.
Any of us has the right and above all the duty to ask consistency to the people who entrust the fate of our country; or our children’s one, for those who have some.
Now, if there is a party that has used as a workhorse being different from the old politics of attachment to the chair and broken promises, in addition to the sudden face change, this is definitely the Northern League (Lega Nord).
It is hot news the stop to the Federalism.
The response has given a tie, 15 to 15, which translates into a rejection.
In anticipation of that outcome, the principal leaders of the Northern League have issued strong statements in recent days.
As I have said before, I repeat that this Blog does not forget.
On the other hand, the good or bad in the web - depending on your point of view - is this: what you say stays and can still be used against you…
The Story:
Once upon a time there were two friends.
Their names were Umberto and Roberto.
In January 20 of 2011 Umberto said on the public square: "We set out yesterday. Federalism passes or we go to the elections. Berlusconi is in agreement, the reform has to go one hundred percent."
We set out, it has to go one hundred percent; these words are emphatic and unequivocal.
Who denies it, lies knowing to be a liar or has a serious intellectual deficit.
About ten days later, on January 31, 2011, Roberto said publicly too: "If federalism does not pass on Thursday, we all go home."
Here too, there is no possibility of any misunderstanding.
When you start the sentence with if, you put one and only one consequence: the necessary condition.
Those who disagree here are bifurcated or deficient in the cervix too.
On February 3, 2011, Umberto left everyone breathless.
Where a few interested souls asked if the balance on federalism will lead to the elections, he replied: "Let's see, let's see."
Now, by chance or bad luck the vote on federalism stood on a tie.
Immediately after the tragic response, Umberto said succinctly: "So we go to elections."
Of course, this was not a clearer declaration: "We go to elections."
Or, with the maximum summary: "Elections."
But it was still an evident statement, with one direction: elections.
So, Umberto and Roberto had two options ahead and once again who does not agree is addicted to lying otherwise has an exceptionally light skull: they would have asked the election or… or we are talking about the usual incoherent guys… 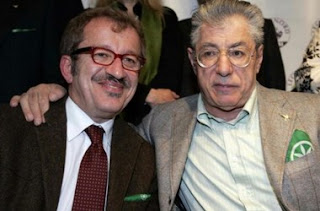 The News: Federalism at risk balance.
Stories and news: “invented” Stories, fruit of my imagination, inspired by “true” media News.