February 11, 2011
Stories and News No. 320
Augusto Minzolini is priceless.
Where could you find a TG1 director like him?
Let's be honest.
Since immemorial time, Italy State Television RAI is controlled by the actual majority in the parliament.
And what government has never had a more helpful chief of the most watched newscast?
This is the biggest purchase in the history of Berlusconi, more than Ronaldinho and Kaka.
Six minutes!
Six minutes are what last night Giuliano Ferrara would have to spread his pro Silvio spot and in particular to indicate the manifestation against the hypocritical neo Puritanism organized with his newspaper, Il Foglio, for Saturday 12, at the Theatre Dal Verme (in English, worm…) in Milan.
Well, not to be picky, but since the world began the manifestation are in the streets, facing the risks of it.
In theatre you do a show, which can be a tragedy, a comedy, or a farce…
Reading from the newspaper web site, I am struck by the presentation of the VIPs who joined the event.
However, I have heard that another man has subscribed the manifestation.
Since he read about the demonstration and especially the facts that inspired it, immediately sent his adhesion…
The Story:
Dear Giuliano Ferrara,
my name is Detlef S., that is, with this name I have come into the limelight of the international press.
I wanted to say that I am with you.
I read about Berlusconi and investigations relating to him.
Above all I learned about the way allegations were made against him: watching through the keyhole.
Damn Puritans!
That is exactly what I say.
How do they can?
How do those damn hypocritical people dare to poke their nose in the life of the rest of us?
I live in Germany and, as Mr. Berlusconi I am also a victim of espionage worthy of a Communist dictatorship, which in my country we have known well.
In my house I am or not free to do what I want?
Do these people have the right to invade my privacy?
What authority do they get to judge my morality?
What made them to believe they are better than me?
From the bottom of my heart, I say thank you for your initiative.
I could not believe my eyes when I heard of it.
I'll do anything to be there.
I just have to find a babysitter for my daughter.
You know, Berlusconi is complaining, but if he knew that my privacy violators say that I have raped her at least 350 times for twenty years and that most of the seven children we live with are hers.
So what?
Nobody has the right to interfere with what I do in my private life, isn’t it? 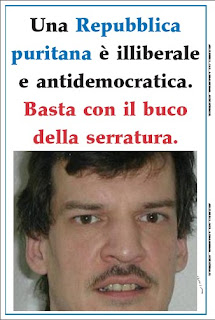 (Photo Detlef S. from here).
The News: A Puritan Republic is illiberal and undemocratic. Stop with the keyhole.
Stories and news: “invented” Stories, fruit of my imagination, inspired by “true” media News.