February 23, 2011
Stories and News No. 328
I note with great interest not only news but also how they are distributed.
I think it is a clear symptom of how we relate to what is happening, what aspects of contemporary history we see as a priority.
Take for example the increasing escalation of the uprising in Libya.
I just did a search on the net and it seems that in Italy and not only here, at least on the web, the shameful Berlusconi’s attitude before, during and after the current uprising, with the dictator Gaddafi inspire more curiosity than usual.
I fully agree, needless to say.
However, to be honest, it should be mentioned that the disturbing ambiguity of our country's relations with the Libyan leader was not born yesterday, let alone the day before, but has a more than a decade history.
On the other hand, tell me what obscure guy of the last century we have had not relations with.
The point is another, in my humble opinion.
The point is that we speak of 10000 deaths (Updated 8.32 pm).
10000 innocent people killed in the public square, guilty only of enforcing their right to a free and democratic country.
This noble culpable is still lacking in many of us, don’t you think?
Us, on the other side of the sea.
Us, observing all in one monitor, in the PC as TV screen, via the latest mobile phones.
However, distance does not necessarily mean innocence.
Not even guilty, okay, but responsibility does.
So, it is right to charge the deaths with an honest calculation…
The Story:
10000 deaths theorem
Hypothesis:
Take a state called Libya, and imagine that it is totally in the hands of a leader named Gaddafi.
Let's say it that in forty years he established a dictatorial regime that is guilty of despicable actions.
Now consider another state, called Italy, and imagine that instead of Libya is considered free and democratic.
Let’s say that Italy built in the same forty years many political, strategic and especially economic relations with Gaddafi’s nation, so the dictator - through the Libyan Investment Authority and the Central Bank of Libya - has today:
7.19% of Unicredit
7% of Juventus Football Club
3% of Finmeccanica
2% of Iveco Fiat
1% of Eni
Now, if Gaddafi bombed a defenseless crowd in the street, killing 10000 people, proper percentages follow:
Thesis:
About 720 dead go to Unicredit.
700 dead to Juventus Football Club
300 deaths to Finmeccanica
200 dead to Iveco Fiat
100 dead to Eni
Corollary:
A considerable and symbolic percentage is then assigned to every government in the country called Italy who has not taken the right distance from those who claim the right to kill innocent citizens… 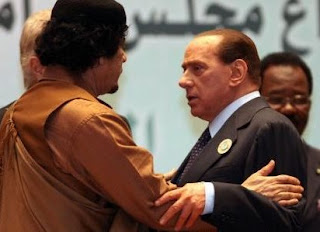 The News: Minister Frattini: by Gaddafi just rhetoric and falsehoods about Italy.
Stories and news: “invented” Stories, fruit of my imagination, inspired by “true” media News.