February 14, 2011
Stories and News No. 321
I make two assumptions.
First, I think it's pretty useless to waste time pointing out the sly activities by the editorial staff of Il Giornale and most of Silvio Berlusconi’s subjects - including his 'rescue pant' Giuliano Ferrara - to persuade the various fools who listen to them that the object of contention is Prime Minister’s morality, rather than his criminal record.
Second, I have already had occasion to remark several times on this blog how much Il Giornale is exemplary in a school of journalism, of course negatively.
In other words, do the opposite of these gentlemen and you're on your way to learn what to inform people means.
Some may object: why do you still dwell on the Berlusconi family newspaper?
You know, I have always been a lover of horror and the extreme personalities intrigue me.
I'm curious about their twisted psyche and how far they are willing to push the limits of the permissible.
I am talking about characters like Thomas Harris’ Hannibal Lecter or Stephen King’s Jack Torrance (The Shining), to name two at random; or as Alessandro Sallusti, the current editor of Il Giornale, a man who replied to a million people in the street - mostly women - clearly adverse to Silvio, with a front-page picture (1979) of a naked Nichi Vendola.
Someone else can argue: Lecter and Torrance are fictional characters, while Sallusti is real.
Hey, that's the beauty!
All happens really.
So, it's certainly plausible that…
The Story:
We are on the editorial staff of Il Giornale.
It’s Sunday, February 13, late afternoon.
Mr. Sallusti, the Director, is on the head of a long desk and the contributors sit on the two sides.
I might say journalists, but I will not confuse you too much your ideas…
We are in a key moment: they must decide the Monday main article.
The group is perfectly split in half.
The question is on two articles whose meaning is basically the same.
Even here, instead of articles I could say news, but again I do not want to create further ambiguity.
I make it short.
The staff agrees that in front of a million women taking to the streets against Silvio you must shut up or…
Or you hit something on the front page that has nothing to do but that is so strong - from their point of view, of course ... - to catch full attention of readers.
The strength – the modern communication demonstrates - is in the image.
Yet here, instead of communication I could also say journalism, but I can confirm this once again: this story is about something else.
So the uncertainty is between two separate photos, despite the significance of the respective pieces is very similar.
Naked Nichi Vendola picture of 1979: 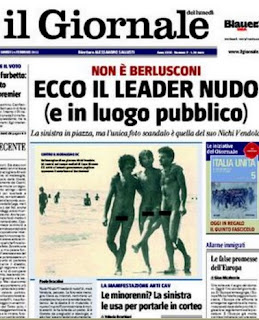 Bersani with discovered chest when he played the banjo in high school: 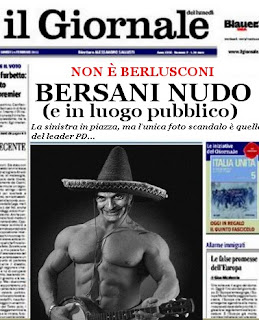 Sallusti has to deliver the last word; he looks carefully at both and decides after a thoughtful reflection to discard the leader of the Democratic Party.
"Excuse me," one of those who voted for Bersani asks, "you chose Vendola because you believe he’s the real leader of the opposition and therefore more important to attack?"
Sallusti nods her head and quit annoying, after having launched a dirty look to him.
The latter was fired.
He can not be part of that redaction if he does not understand a basic principle: a not partial newspaper publishes news to attack opponents. Berlusconi’s Il Giornale must sell copies…
The News: Il Giornale published a photo of Vendola naked.
Stories and news: “invented” Stories, fruit of my imagination, inspired by “true” media News.