February 25, 2011
Stories and News No. 330
I read this morning that last night Obama phone called Berlusconi ‘to continue consultations on the situation in Libya and coordinate our urgent efforts to respond to developments and ensure that there is appropriate accountability’.
To be precise, the White House website says that U.S. president made the same call to Sarkozy and Cameron.
The same…
Well, not really.
It also happens to everybody, isn’t it?
If we telephone to different persons, although we must communicate the same message, we differently speak, depending on the relationship we have with them.
For example, if Berlusconi had to invite to his party a young girl and Sarkozy - of course not the same party… - I do not think he would use the same words.
Now, since what emerges from the recent revelations by Wikileaks, it seems that the U.S. government has understood this: when Italy prime minister is led by the hand and made feel important, he proves to be the best ally; Above all, his weakness can be exploited to wrest unexpected concessions…
The Story:
Obama, after talking with Cameron and Sarkozy, calls Berlusconi:
Silvio: Hallo? Who is?
Obama: Good evening, Silvio. It’s me, Barack.
Berlusconi has recognized the number on the phone, which has in its memory as the suntanned, but he shows to be surprised.
Silvio: Oh, Barack! How are you?
Obama: I’m fine. I wanted to talk about the Libyan issue.
Silvio: Tell me.
The US president reminds the psychological aspects of Berlusconi and starts with the smooth.
Obama: Silvio, you know how America estimate you.
Silvio: Thanks…
Obama: No, don’t thank me. Having a leader of your caliber is a privilege for us.
Silvio: Thank you…
Obama: Let me tell you, you deserve it. A statesman like you is worthy of a place among the great men of history.
Silvio: Come on, so I'm confused…
Obama: That's the truth, Silvio. I am committed personally to ask the Swedes to seriously consider your name for the next Nobel Peace Prize.
Silvio: Oh my God…
At this point - despite appearances, a fact that does not happen since a lot of time, Berlusconi has a sudden erection.
Obama: Do not talk. Do not waste your precious breath. Look, if you were American I… I would immediately resign, to joyfully offer you my chair.
Silvio: Ahh…
Another amazing event, the premier comes, without viagra and bunga bunga too.
Berlusconi regrets for not having registered the phone call.
Obama: Silvio… are you alright?
Silvio: Yeah!
Obama: Well, now I can tell you what you have to do. 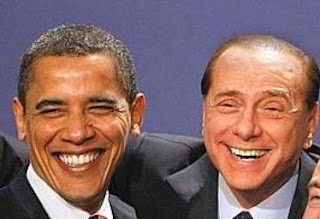 The News: Obama phone call to Berlusconi about Libya.
Stories and news: “invented” Stories, fruit of my imagination, inspired by “true” media News.