March 14, 2011
Stories and News No. 338
The Story:
My name is Silvio.
No, I am not him.
I could be, but that is not a necessary and sufficient condition.
Not this time.
I am here to state that I am pro-nuclear.
I am, no ifs or buts, as people say often today to underline the insolubility of their position.
Do you want to know why?
I tell you at the end.
No one can insinuate that I am a last minute atom’s supporter.
The origins of my beliefs go back exactly to those of the first nuclear reactors.
Above all, I challenge you to prove I am ready to change my word at the first difficulties.
For this reason too I can not be that Silvio…
Nothing has so far succeeded to modify my point of view.
For example, in August 21, 1945, in Los Alamos, New Mexico (United States), Harry Daghlian - a technician of the city's plant National Laboratory - had the misfortune of dropping two cubes of plutonium and carbide tungsten in the ground and died some days later because of radiation.
But I did not change my mind: I was pro-nuclear.
On 21 May 1946, again in Los Alamos, during a public demonstration, the physicist Louis Slotin pulled two hemispheres of plutonium and unwittingly gave birth to a so-called critical mass. Slotin died too about ten days later because of radiation.
What about me? I was ever pro-nuclear.
On 12 December 1952, in Chalk River (Canada), there was an incident at the reactor room.
An explosion followed which caused the leakage of contaminated coolant that could contaminate the river Ottawa.
However, even then my yes to nuclear power remained intact.
In 1957, at Windscale (UK), at the nuclear power station there was a slow combustion of graphite, which caused a major leak of radioactivity, with all the consequences you can imagine.
That was not enough to make me move an inch from my own ideas in favor of nuclear power.
In the same year, in Majak (in the old USSR), a serious incident happened, this time at a military depot of radioactive materials. Due to the leakage of radiation, the around area was prohibited, but that did not stop the risk for the population.
However, even in those moments I had second thoughts: always yes to nuclear power.
In 1961, in Idaho Falls (United States), three people died as a result of an accident at the Testing Station of the National Reactor.
I was more convinced than ever of my reasons: the nuclear is safe.
In 1969, in Lucens (Switzerland), fortunately the accidental contamination of the cave where the nuclear reactor was did not cause any leak of radiation, at least according to the chronicle of the time.
Anyway, try to understand me: I had not changed my mind with the dead, let alone without…
In 1973 there was another accident at the Windscale plant in Great Britain, however, unable to dent my nuclear passion.
On 22 February 1977, the accident happened in old Czechoslovakia, at the Bohunice plant.
Well, I was still favorable to nuclear power.
On 28 March 1979, Three Mile Island (Pennsylvania, United States), the incident caused a lot of radioactive leaks, requiring the evacuation of 140,000 people.
But I always stayed in favor of nuclear power.
On 15 September 1984, in Athens (Alabama, United States), there was a serious failure of the instrumentation at the local plant, but no radioactive leaks.
So I could put into question for so little?
In 1986, Chernobyl (Ukraine), here is the most serious accident of history.
Greenpeace report states that the explosion and the subsequent release of radioactive materials have caused - in addition to environmental damage - the death of about 100,000 people of cancer, leukemia and more.
However, I feel sorry for them, but even then I have not changed my mind: yes, yes to nuclear power.
Thus, although in 1986 there were accidents also in Plymouth (United States) and Hamm-Uentrop (Germany), my position remained the same.
The three incidents in the following year, in the cities of Goiânia (Brazil), Delta and Lycoming - both in the United States - did not get different results, despite the former caused many deaths.
In 1996, there were two other incidents in the United States, in Waterford and Crystal River, but everything remained as before in my preference for nuclear power.
In 1999 in Tokaimura (Japan), two technicians at the plant died from radiation after an accident and I was ever pro-nuclear.
In 2002, here is a new incident in the United States, specifically in Oak Harbor, but I was impassive.
On August 9, 2004 here is the second time in Japan: incident at the nuclear power plant in Fukui.
Five people died and a dozen wounded, the medical bulletin was sad, but not enough to pity me and attack my certainties.
In 2006, in Fleurus, Belgium, an accident caused serious consequences for a worker exposed to radiation.
However, I remained faithful to nuclear power.
Well, let’s arrive at today, to the explosions at the Fukushima plant, in Japan, due to the earthquake.
Now, after all this time, do you think that these recent alarming reports can influence me in some way?
After all the previous incidents in more than sixty years of explosions, radiation and dead, do you really think it takes so little to change my mind?
I was, am and will always be a pro-nuclear, and you know why?
Because whatever happens, anything wrong occurs to me and people like me.
Indeed… 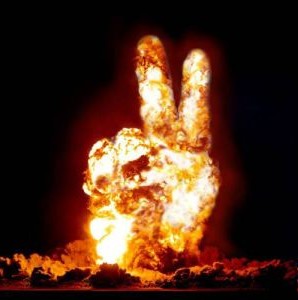