I defend public school because it is open to them too

March 01, 2011
Stories and News No. 332
Like most of the controversies and debates in my country, everything started from some statements made by Silvio Berlusconi at the end of last week, on the occasion of the Christian Reformists Congress: “Freedom is not the public school.”
Obviously, according to a now rancid script, the following day Italy premier said his words were misinterpreted, but now the wave has gone and that's what matters to him.
Now, I'm not going to stand on it and fall into his pathetic attempt to recover the now depleted appeal on the church hierarchy (see also Silvio’s statements about homosexuals, never démodé here.)
However, the issue is not only linked to the provocations of Berlusconi, because nobody as this government has caused damage to public school and generally the world of culture.
The concept which I would like to focus on is the coherence.
It always represents the real Achilles' heel of politicians.
If you say one thing and then do another one, not only contradicting the former but also applying a diametrically opposed idea, well, 'the assumptions are two: the people see it and your career is over or… well, ladies and gentlemen, here is the Berlusconi government, the most contradictory of the last 150 years.
Take for example Silvio going to the Congress of Christian Reformists.
What do they want to reform? Are they wishing to introduce the Bunga Bunga ritual among the sacraments?!
The major Italian statistic centre, Istat, tells us today that young people unemployment rate has reached 29, 4% on a monthly basis, the highest peak since seven years.
In other words, one to three young people is without a job.
And here's what the Minister of Economy Giulio Tremonti said: "With the right sleeve, feet on the ground, one step after another, the Italians and Italy are going in the right direction."
Fucking right direction, that’s what at least one of those has the right to exclaim.
Even two do, because maybe another one has a precarious job or perhaps all three, if the third one works in a public school.
Yes, public school, which according to Minister of Education Mariastella Gelmini is equal to the private: "For us, and in the words of the Italian Constitution, the school can be either state, both equally."
The bad thing is that the Constitution says exactly the opposite.
I know: the resignation of a Minister of the Republic who shows to not know the Constitution would be granted in a civilized country.
That is another contradiction of the Government of contradictions.
And so the contradictions must be fought with other contradictions…
The Story:
I defend public school because it is open to all.
Your bank account, if you come to school in limousines or tram, if you have elegant clothes or jeans with patches don’t matter.
This is why I defend the public school, but also because everybody can complete the studies.
Also Silvio Berlusconi did, who in 1961 graduated in law at the University of Milan, a public school.
Also the Education Minister Mariastella Gelmini made the same at the University of Brescia, a public school.
Also the Minister of Defense Ignazio La Russa got a law degree from the University of Pavia, a public school.
Also the Minister of Culture Sandro Bondi did, obtaining a degree in philosophy from the University of Pisa, a public school.
Also the Equal opportunities minister Mara Carfagna, who graduated in Law at the University of Salerno, a public school.
Also Foreign Minister Frattini did, who attended the secondary school Giulio Cesare in Rome, a public school.
Also Economy Minister Giulio Tremonti did, who graduated in law in the University of Pavia, until proven otherwise, a public school.
And if also they did, this means that everyone, but really everyone can do it… 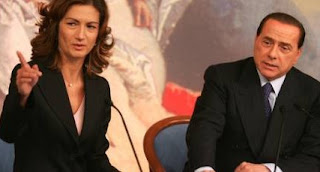 The News: The destruction of public schools.
Stories and news: “invented” Stories, fruit of my imagination, inspired by “true” media News.