William and Kate wedding waste: cost of the show

April 29, 2011
The world media is now flooded with marriage between the so-called 'Prince' William and Kate Middleton.
Newspapers, television, the ceremony is on the top news all over the planet.
On the web, everywhere you had the chance to follow the live of the wedding, even on Youtube, right in the channel of the British royal family.
I'll be venal, but the first question I asked myself is this: how much does this show cost?
Well, it seems that we are talking about 70 million, almost 80 million €.
Wow.
In times of crisis, is not it a bit too much?
"It’s their business," the fanatic liberal with the ass on the upper floors that passes here might say. "They have money and spend it as they wish."
Well, it is not like that…
Those 80 million euros will not come all from royal family’s pocket.
Let’s read this bill.
Only for the security, the wedding costs 33 million, about 40 million €.
According to Sir Paul Stephenson, deputy commissioner of Scotland Yard, at least 5,000 policemen will work for the event.
Who pays? British Taxpayers will do, of course.
In addition, I also read that the day of the marriage between the two privileged citizens will be declared national holiday.
Well, stopping the UK economy for 24 hours will cost the country less than 6 billion, almost 7 billion €.
7 billion € for a wedding in a country that only this year has had a fiscal deficit of 256 billion, about 300 billion €.
The British National Bureau of Statistics says that in February 2011, more than 9 million people aged 16 to 64 years were unemployed and the unemployment rate from December 2009 to February of this year rose by more than one percentage point.
In other words, people without job have increased very much.
Yet on the internet you may read about William and Kate’s fable.
Nothing new, I know.
That is the balance of our world.
The fable for a few is the misfortunes of many.
However I have the distinct impression that for the first time something is changing and that this ridiculous circus will not last forever… 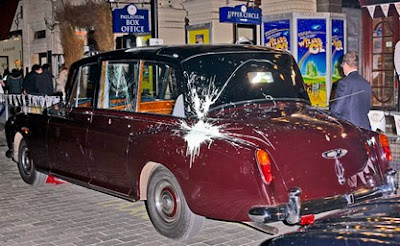