November 16, 2011
Stories and News No. 358
Blog: Mr. Orwell, due to recent crisis, a technocratic government was born in Italy, formed by politically neutral experts or technicians. What is your opinion about it?
G. Orwell: The technocratic government does not change the leadership of a country, because that leadership created it, the same group of people who is primarily responsible for the crisis.
Blog: How can you get rid of such a leadership?
G. Orwell: There are only four ways in which a ruling group can fall from power: either it is conquered from without, or it governs so inefficiently that the masses are stirred to revolt, or it allows a strong and discontented group to come into being, or it loses its own self confidence and willingness to govern.
Blog: If this does not happen?
G. Orwell: A ruling class which could guard against all of them would remain in power permanently.
Blog: How does that group convince the citizens that technocracy, a not democratic solution, is the good way?
G. Orwell: It is quite simple. All that you need is an unending series of victories over their own memory using the doublethink.
Blog: What is it?
G. Orwell: You have to simultaneously inculcate in the citizens two opinions: democracy is impossible and the Parties are the guardian of democracy.
Blog: How do the Parties accept this compromise?
G. Orwell: A ruling group is a ruling group so long as it can nominate its successors and a Party is not concerned with perpetuating its blood but with perpetuating itself. Who wields power is not important, provided that the hierarchical structure remains always the same.
Blog: Even if a moment before the parties have clashed on everything?
G. Orwell: As I said, these contradictions are not accidental: they are deliberate exercises in doublethink. For it is only by reconciling contradictions, as right and left, that power can be retained indefinitely. 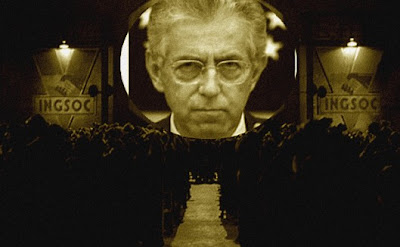 The News (BBC): Who, What, Why: What can technocrats achieve that politicians can't?
Freely inspired by 1984 (George Orwell)
Stories and news: “invented” Stories, fruit of my imagination, inspired by “true” media News.
Share the post: