According to United Nations ( July), the Syrian civil war has caused over 100.000 dead.
On the eve of another mission of peace, preventive war or whatever you want to call it - once again led by the United States, two children , two cousins , orphaned of their parents and brothers , play in a refugee camp.
Ashur is eight years old and his father died fighting against Assad.
Lilith is seven and his dad deceased on the other side of the fence.
That also happens in so-called civil wars.

"What are you drawing?" Lilith asks. 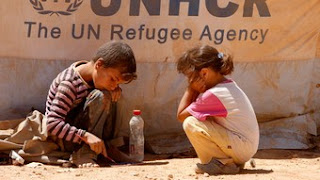 "A hand."
"What hand?"
"The hand of a man."
"I like it," Lilith says. "It looks real."
"It is real."
The wind that caresses them is warm and unaffectionate. This does not prevent them from approaching each other.
Despite all.
"Are you happy?" Lilith demands.
"About what?"
"The Americans, Americans are coming."
"Why should I be happy?" Ashur replies without stopping to perfect his design.
"Obama will defeat Assad," Lilith responds as if the former is a kind of super hero, " that was what my uncle wanted, right?"
My father.
The child needs time to translate the words into his personal interpretation of the fundamental relationship, swept away in a day like many others, in homage to the god of hate.
"Dad wanted to defeat him without foreign help."
The answer goes through the mind of Ashur but does not dare to cross the border of the lips, because the heart has blessed timing to alert the brain that the battle of one has deleted his brother's life and vice versa.
Let alone the victory.
"This time will be different?" Lilith asked with pleading eyes.
For the first time Ashur looks up laying his eyes with prudent delicacy on her cousin ones.
The beloved friend is back with horrible price.
This time will be different from Iraq. This time it is not about oil , the evidences are true, now, we believe it, it must be so.
This time will not be as in Afghanistan, the enemy is really here, he is not hiding in Pakistan.
Friendly Fire? Nah, they will be good, precise, surgical, the defenders of peace.
This time will be different from Bosnia, they will leave less rubbish and more serenity behind.
Democracy and interests in the Middle East have no ties this time.
The Nobel Peace Prize swears on it.
A Peace Nobel Prize leads the army, this time.
This time nobody will be able to bring in casualties among civilians, women and children that continue to grow after the end of the show.
After.
And after that.
As in Iraq and Afghanistan.
This time will be different, right?
Ashur is not responding.
But he shows a smile.
Whether it is a yes or not only the future will tell.
Meanwhile, the child approaches the head to Lilith and gives her a kiss on the cheek.
"Look," he exclaimed pointing to the drawing now finished. "This is the hand of my father."
"It is beautiful," she murmurs.
It is the same as that of my father…

Read other stories about friendship