I read that, according to a study published on Nature magazine, 7000 years ago European men had dark skin and blue eyes.
But what the study does not say is that even then the immigrants had hard life in Europe, as it is clear in the translation of an apocryphal graffiti summarized below.
It depends as always, to be taken literally, on the point of view...

We European primitive men were racists, but try to understand us.
We had to first think about our furs.
These people arrived here on board their stegosaurus and pretended to chase our mammoths and collect our ferns.
On the other hand, it is nature that had decided so. We say nature as Mother Nature, otherwise you might confuse it with the well-known magazine that, in the distant future, will find out us.
Immigrants were different from the rest of us, let's face it.
In fact, if we had dark skin and blue eyes, immigrant primitive men had dark skin but dark eyes.
Sure, sometimes they tried to deflect the controls at the border, passing with lowered eyelids for the most imaginative reasons.
There were of course people alleged blind and blindfolded due to infections of the cornea, chronic allergic to sunlight and perennials narcoleptic.
However, we knew all that and if you did not show your eyes you were not in.
It was useless, then, using providential colored contact lenses, because we knew that too.
The only lucky people were those with cataract problems, more difficult to track down, but we were gearing up for that too.
Some progressive thinkers came up reminding us about when we were being discriminated too, in this case by primitive men overseas.
They also had dark skin but green eyes. 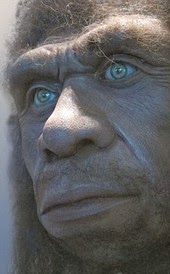 On the other hand, primitive men overseas had arrived on their land after men so-called primitive natives, who had also dark skin, but red eyes.
The former called them red skin and the latter were angry because they preferred to be called natives. And, to be honest, red eyes, not skin, but these are details.
Or not.
As the man of Cro-Magnon told, eyes are the cave of the soul, because the mirror had not yet invented.
Well, you know, in our times we all were dark skinned.
The only thing we could use against the others was the color of the eyes.
But try to understand, we were primitives.
In those days we did not have the intelligence and maturity sufficient to go beyond appearances.
Blessed are you who live in the future…