Despite the end of the war was declared in 1945, Onoda continued to fight in the jungle until 1974...

My name is Hiroo Onoda and I do not give up.
This could be written now, on my tombstone.
Monument in memory of a story that ends today.
The story of a soldier.
Hiroo Onoda and his war.

This could be the subtitle. 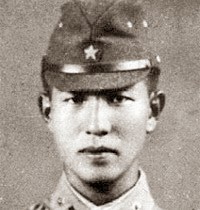 Nevertheless, there are various kinds of wars, and what sets it apart are more than ever the causes. The real causes.
Especially against whom you fight. The enemy. The real one.
However, as often happens, every story hides others.
Invisible to most people. Except the protagonist.
These are the joys and the sorrows of the leading actor. Perennially occupying the script, he cannot claim he had not seen.
Yes, of course, it sometimes happens that a choice with such vehemence obliges us to fix a horizon among the many that we cannot consider another one.
Nevertheless, obeying an order is not and never will be a real choice.
The opposite does.
So, on an inert road, straight and free of any breakthrough, deaf and blind to every call, honoring an alienated promise of death, it happens that other stories unwinds off the screen.
A twenty-nine years tale.
A story? A hundreds volumes saga, to say the least.
With a myriad of characters.
Among them, here's a girl in the crowd, that turns into a life companion.
And a desire of soul and dreams, in the form of a child.
A project that grows in spite of the cynical disenchantment of the onlookers.
And maybe that changes things for the better. Or at least many.
A succession of bad actions, of course, we are always in the human literature.
But among the many, you will find a decent one, right?
And if it will be the good one?
As the wonderful gesture that remains, for example.
Well, just pay attention to that chapter of the saga above, the seemingly insignificant one, gooey appendix to the essence of the entire work.
The hugs.
All the hugs in one book, maybe accompanied by photos.
Twenty-nine years, or three hundred and forty-eight months of unions between bodies in a variety of styles. The distracted and convinced embraces, the passionate and affectionate ones.
The kisses. Twenty-nine years, three hundred and forty-eight months, twenty-seven thousand one hundred and twenty days of each other landings lips. And even in this case, with all the samples of unique and unrepeatable meanings.
Do the same with the exchange of glances, heated and fleeting discussions. All the times you made love. Each instant that is able to win the stage. And then a role in the plot.
All that will not be mentioned in the annals. But it was there. In the meantime.

My name is Hiroo Onoda and I do not give up.
These words could have an impact now, on my tombstone.
Remembering a story that today finds its end.
The story of a soldier.
Hiroo Onoda and his war.
Against himself.
And against a twenty-nine years life I can only imagine.
A ghosts story that I missed.
And I will miss forever...