Illegal immigration crime what is it really

If I arrive illegally in a country I make a crime. 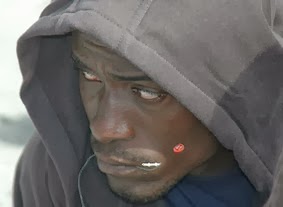 I'm guilty.
This is what law says.
And if the law says, I am.
Guilty.
I was wrong.
I did something bad.
Something that should not be done.
And that should be punished.
I have to be punished.
A reminder for myself and the all people around.
So that the guilty action will be not repeated.
But...
There is a but, come on.
Let's be honest.
At least here.
Here, on this page, let's say that if I were a supermodel, crystalline eyes and blonde, brunette or red but also with incredible measures and I had passed borders without papers, some help would come, isn’t it?
If I had by chance arrived with my raft and at the same time I could prove to kick the ball with unusual vehemence, making a wonderful score, an ancestor of good origin would be soon available, right?
If then, I could arrive with my brown-skinned face, being Islamic and a rich beard hanging on the chin, without any document, but somehow I would show to be an oil sheik decided to invest my money in your country, maybe you think that someone would dare to report me to the police?
If I had to slyly pass through customs, but with a heavy wallet, filled with pecuniary until it burst, with the exception of an ID, who would be intolerant against me?
And if I were a famous actor from Hollywood?
But still a foreigner, but without a residence permit?
Who, again, who will protest against me?
I could go on, but I guess it's clear where this is going.
I am an illegal immigrant.
I'm guilty.
Because I came illegally in a foreign country.
But my real guilt is another one, right?
I apologize about it.
Forgive me if at the moment I can only offer my poverty.
Because when you complain to me, I know this is what offends you.
If only I had been born less poor...