I read that in India a 20 years old girl was forced to suffer a gang rape by the village elders because, been ordered to pay a fine of 25 thousand rupees for having dated a foreign guy, she refused to obey.
It seems a distant story, and yet, everywhere in the world and in every moment there are people who feel free to abuse their fellows as they are considered inferior and weaker.
There are and, in my opinion, always will be.
Here is who can change the story... 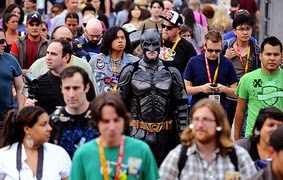 Yes, I am the Dark Knight.
And I swear that the next time I see a bully who tries to take advantage of the helpless ones I grab him and get him to the ground.
No, you're not Batman.
No? And then... then I'm Hulk.
Yeah, when I pissed off, my clothes explode and I become a green all muscles giant.
And if it still happens that some coward dares to vent his cowardice on unarmed people I take him out and threw him in the air.
You're not Hulk too.
Really? Well, I did not want to say, but I'm Hercules.
Of course, the son of Zeus.
And when the villain will think to attack the weakest persons in the world I'll be there to beat him with punches.
You're not even Hercules.
In fact... but the truth is I wanted to lead you astray from my real identity.
I'm Luke Skywalker.
The true one, not that blond guy who has disappeared from the series.
The force is with me.
And when some hateful man will dream of hurting others, with the help of my mind I will push him into the atmosphere and the ionosphere and off earth orbit, sending him to roam the universe forever.
You are not Luke and the force is not with you.
I see, I understand, it was just an example.
I confess: I am Diego De La Vega.
Aka Zorro.
And at the very moment that the bad guy will stand menacingly on the poor targets I will cut him with my blade in his flesh, and I will sign him with the famous initial letter.
You are not and never will be Zorro.
Okay, I don’t say otherwise, but this obliges me to find out once and for all the cards.
I'm Harry Potter.
There, I said it.
And thanks to the magic of my well-known wand I will prevent the wicked people to cause pain in the helpless victims of this land.
You're not Harry Potter and never looks like him.
Okay, I give up.
I'm not Batman and Zorro, and all the others.
I'm not even Spider-Man, just to clarify.
I am just like many, who, at this time are among the vile oppressor and his prey.
In the middle between courage and other cowardice.
And every one of those desperate people have only me.
The only chance of salvation.
That’s what we are.
And so you.
Now.