Birds migrating the wrong way: the discovery of Leaf Warbler

I read just now that a bird called Pallas's Leaf Warbler, or Phylloscopus proregulus, during its migration suddenly changed idea and from central Siberia flew up in Italy, near L'Aquila, rather than China, where it actually was supposed to lead by instinct. Travelling 6000 km in the wrong direction.
According to the experts it was a mistake.
Experts… why do not ask the guy directly?
He is also a singing bird… 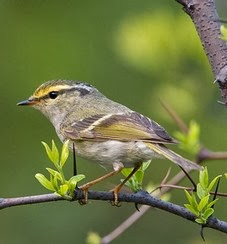 Remember what you told me a whisper from death, in that black tight hug?
You cannot fly, these were your last words.
Almost the last ones.
The last, really last, it was something different than a simple word.
Something more.
Fly.
I loved you so much, in the time I spent with you, together, possibly far from that overrated floor of grass and rock called mainland.
But so more, when you have become just a memory.
That is, the story of you.
With a heartbreaking finale, I agree, but seasoned with a hint of mystery.
A unusual phrase, with an even weirder post scriptum.
Fly.

At first I thought your words were crazy escapes of a mind overwhelmed by the shock.
However, as the months passed and the images of that last scene flowed again, again and again in the replay of my own memory, something sensible begins to take shape.
Two wings.
Two wings flying alone.
Without a body, without beak and feet.
Only two wings.
Free to follow themselves.
Dazzled by unraveling the enigma that you left me as unexpected inheritance I have come across the branch of a tree and I fell to the ground.
There, with my back on the grass, wings outstretched and eyes fixed on the sky fragment that survived the intrigue of leaves I saw the light.
Migrating is not flying.
Sure, you go flying from north to south of this planet and vice versa, it is still the fastest and safest way.
However flying, rely on them, trust them, really believing in them is another world.
The wings I never had.
Yours.
Forgive me, my dear, forgive me for having scolded vehemently when you instantly change the route just for the sake of flying wrong, only to end up in that damn black oil water.
Only now I see who was the crazy and who the bird.
Read as the one who flies because has the gift.
Because he wants to do it.
Not because he have to.
And because flying always knowing where you are going it would not make any sense.
I am happy because you taught me to fly.
In the wrong way.
Also on Stories and News: