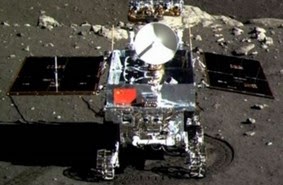 Every now and then, here are some good news.
After twenty days of worrying silence, Yutu, the Jade Rabbit Chinese Lunar Rover, has awakened and returned to work.
These were days of anguish and sleepless nights for Yutu’s family, I think it's understandable.
But now is the time to rejoice and get rid of accumulated anxiety.
“I've always said, and no one ever listen to me,” dad Chang complained, a retired satellite. “A narcoleptic astronaut should not being there, but his mother advised him not to put it in the resume and this is what happens.”
The parent has thus revealed the secret problem to the press that apparently Yutu had hidden during the talks with officials of Beijing Space Agency.
The latter invited Yutu to return immediately but in the monitor he smiled without speaking.
“He left the hearing aid at home,” his mother Lyn attempted to justify, an old black and white TV, those with knob and no remote control.
Meanwhile, the Chinese Space Agency announced an internal investigation.
The mist of the storm thinned, and a name came out.
Someone has falsified the entrance exams of the Jade Rabbit: Yutu sister, the printer Mosako.
“She is adopted,” Chang tried to minimize.
In the meantime, the Agency intends to do everything possible to block the mission and tries to communicate with Yutu through billboards with various written phrases.
Billboards… well, only one with these words: you're fired, return immediately.
Same reaction as before by the Rover, he smiles without speaking.
“If he could read, everything would be easier,” Mosako said, talking with the family lawyer, the toaster Chun, a skilled jaw of Chinese courtrooms. “He is illiterate...”
Hearing the latest shameful revelation about Yutu, the Agency has decided to send another rover on the Moon to communicate face to face his dismissal and replacement.
However, as they say, they had reckoned without the hard drive.
In fact, the Rover which is now on the road is actually a female Rover, her name is Fujiko and is known as Crystal Hare.
But she is even better known by Yutu’s family as his girlfriend.
“They are fresh married,” the mother-in-law Lyn confessed, “try to understand, they wanted a dream honeymoon.”
Police, army, navy and air force are all decided to stop the couple of fugitives at the expense of the government and the court has already held that exemplary punishment awaits their return on earth.
“Possible, return,” Chang said to reporters. “If he goes back to sleep you may wait forever.”
The Agency has contacted Yutu again and this time he is no longer alone in the monitor.
The smiling Rovers are two, now.
Mission accomplished.
Valentine’s Day on the moon.
Honey moon…