It’s a dream, I know.
But I am a player.
And those who play, must necessarily dream about it.
The victory.
But not a normal victory, huh?
Because if you really need to dream, then look for the top.
Anyway, it is just a dream, what are you going to lose?
I knew that the FIFA World cup is in Rome, now, in a world tour that will take it to Brazil, where at

the final whistle of the last match it will be delivered to him.
The captain of the winners.
Yes, I agree.
I am not even the captain, to be honest.
And believe me, I've never figured out if we never had one.
However, who said that to win the game we should have a leader?
If everyone will do his part, we won’t need science to send a ball into the goal.
On the other hand, the name is game, not nuclear fission.
In spite of all that stuff - strategy, tactics, high and low pressing, mixed zone and marking to man, this is always a game.
Sending the ball into the goal still remains the sense of all.
Obviously, I know what your objection would be.
We have one who commands, actually.
Are you referring to who has fun with all of us, right?
The guy who pulls the strings of our two dimensions dance.
Back and forth.
But who scores the goal, really?
The one who cries out the field and goes mad by joy or those like us, who seriously hit the ball, getting the insults, if things go wrong?
The fact is that, in reality, we never win, at all.
There is always someone who takes the credit for our work.
But I'm not here to complain, I want to clarify.
My buddies can testify.
The reds.
As well as my opponents.
The blues.
I never complained about what fate has decided for me.
For us.
Forced to this endless game.
Nevertheless, even the condemned creatures sometimes close their eyes and travel.
Especially them.
It's a dream, I know.
But I am a player.
And those who play, must necessarily dreaming about it.
The victory.
Of the World Cup... 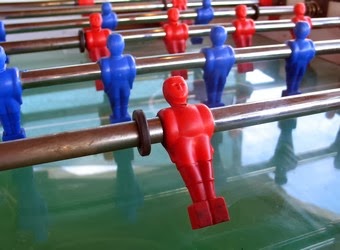