Ladies and gentlemen, after 400 years we made it.
One of the most famous optical illusions has been unveiled.
Why does a white object on a black background appear larger than the contrary, even with the same size?
Galileo Galilei was the first to raise this question, and on the occasion of his 450th anniversary, a team of researchers from the State University of New York found that the illusion depends on how our eyes identify light and dark.
That is, our interpretation of the black/white contrast is conditioned by the idea we have of both.
Damn, this is a scoop.
Come on, who among you has not thought the same thing?
The implications of this revolutionary scientific enterprise force us to look at things on a different light, literally.
Although of the same size, up to now the white on black seemed larger than the black on white background because we had prejudices.
Let's face it.
This conditioning mechanism has made great damage with a stubborn imaginative discrimination.
The white on black is necessarily a more honest approach.
And the black on white background is certainly to steal something.
Who? To the white on a black background, which becomes the protagonist of the movie.
Movie where the black on white background have to die first.
Or doing the villain, the drug addict, the criminal.
On the contrary, he can be the best friend of the white on a black background that marries the beautiful girl. 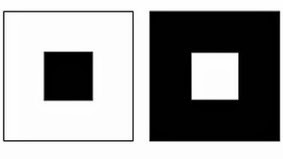 Or the white on a black background that never falls in love with a black on white background because who will come to watch this?
Only the blacks on white background.
And some white on a black background very confused.
You may call them the gray guys, so to speak.
In fact, the real problem according to Galileo was always the gray on white or black background, because you never know what he is going to do.
And since the common people, the average citizens, don't like too ambiguous or complicated things, they want to be safe.
White on black background, all right.
Black on white background, no way.
The real problem is when there is a blackout or in general the night falls.
It becomes more difficult to distinguish white and black. This is the reason why people at night go out less and prefer to stay at home watching TV.
Large screen, high definition, and especially well-defined colors.
But now that the illusion was revealed, how could we know who deserves more our trust between white and black?
I think that we all have to make the effort to learn more about the others.
Also on Stories and News: