JK Rowling, the author of the famous saga of the young wizard of Hogwarts has revealed that, according to simple criteria of plausibility, Harry should have married Hermione instead of his friend Ron.
I was disappointed, because - for what it's worth – I liked the improbable romance between the cute but clumsy Weasley and the smart and charming girl played by Emma Watson.
On the other hand, is it really plausibility so important in the stories? 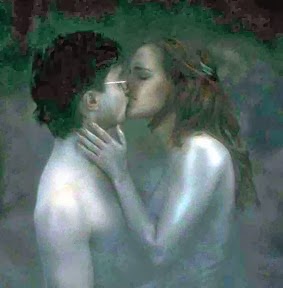 Let’s get an injection of truth.
That's what it takes, to our imagination.
And all would be more acceptable.
Maybe.
More logical.
For sure.
Peter Parker is bitten by a radioactive spider and a shy nerd and geek finds himself transformed into a good looking guy, also strong as a bull. With great power comes great responsibility? Yes, I agree, but why am I doing this? Everything is a crap, you know what? In the plausible story it’s crazy to think Peter sewing the costume and mask to fight Goblin, Octopus and Sandman, anyway considered as a criminal by the police and Jonah Jameson. In the real version, he marries Mary Jane, cheats on her with Gwen and starts to really make the wrestling champion to earn money, then breaks into the film industry and earns even more.
D’Artagnan finds himself with a subspecies of horse and challenges on the same day the top three musketeers of France? Nah, in the plausible world he sells the nag and goes on to become a painter in Paris, in the artistic quarter of Mont Martre, listen to me. What makes him risk his life to work for the queen?
James Bond on the service of Her Majesty whole life? Are you joking? You only live twice?! Well, we barely live one life, let's face it. In the plausible stories ì 007 sold himself to the Russians and then back to the British empire, then switches to the CIA, betrays them with the Chinese, becomes al-Qaeda but then converts to Buddhism and writes a memoir book that sells to Hollywood and at the end is a candidate with the Democrats in Arizona.
Miss Marple… sorry, but do we want to talk about? The old lady who goes around solving cases where the police regularly groping in the dark? In the plausible story, at the very first intrusion the old woman gets arrested and then interned in a psychiatric clinic. That’s it whether her comments are right or not, because that inspector would accept that a crone granny proves to be smarter than him?
The same would happen to Sherlock Holmes, this is clear. Indeed, if indeed he is so brilliant, he would never disturb Scotland Yard in the investigation. On the other hand, in the case the latter would like his advice, Sherlock would ask for a handsomely fee, Watson would cause him to have a percentage and everyone would end up in court or to the hospital after a violent struggle.
At the first sign of imbalance, the crew of Captain Ahab revolts, it would be hung for his wooden leg to the highest flagpole and Quiqueg would certainly be the mind of the mutiny. And also Sancho Panza would ask a fee to Don Quixote after yet another folly.
I mean, I could go on but I will stop here, because I am convinced that the virus of plausibility would finish to shred every figment of our imagination, starting from the best.
So, despite what even the great English writer thinks, in my small way I prefer to accept the wings, although cheesy paper made, enjoying the inadmissible flight until the end of the words.