Ladies and gentlemen, the time has come to remove the masks. 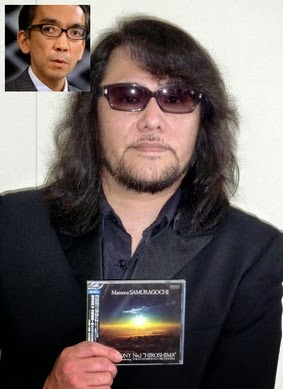 The famous Japanese musician, Mamoru Samuragochi, does not know how to write music.
And he is not deaf, as he has always claimed.
The true composer of his works, Takashi Niigaki, is a teacher at a school in Tokyo, exploited for decades by the Japanese Beethoven, as he was called.
An isolated case? An extraordinary exception in the firmament of the famous people? Quite the contrary.
The all story is greater than that.
The best-known writer, who I will not name because it is not yet official, confessed to copy his novels directly from the diary of the grandmother's Chinese caregiver.
So, in a chain reaction of deceptive words, or a domino of first choice books, other popular authors have confessed.
The porter and the plumber, the waitress at the bar and the lady of the fruits, the introverted young man on the near apartment and the girl with the cap met daily on the subway, the Egyptian hairdresser too, here are the real authors of the best sellers.
But that's not all.
Close your eyes and image.
Your singing idol.
The golden voice with the alluring body, which never hurts.
Indeed, it is much more than the vocal cords, let's face it.
Well, every voice that is now familiar in your ears, verses or choruses dressed by, belongs to a single creature.
I am talking about a schizophrenic parrot, a rare case of volatile with multiple personalities, tragic consequence of a lifetime trapped in the living room, forced to listen every music festival and show in recent years.
Do you think it is enough?
Well, but this is nothing.
This is for you, that in all this time have lived with envy toward over-sized star of the bedroom. You have to know that at the time of most turbid moment somebody else arrived.
The cousins.
Yes, every star of the mattress owes his success to that cousin.
But in the end, you've always suspected, isn’t it?
Who has not had a dream about a cousin, come on.
Are we over the limit?
Maybe.
Sorry to puncture the balloons, covered with glitter and sequins, circling on the admired horizon, but if they confess it is not my fault.
In fact, in a long row you will see outside the television studios sad queues of well-known actors and actresses.
Actors and actresses, we? Are you kidding? Do you think we studied acting? A real course, huh? Not that stuff done in ten days to write something at the bottom of the book.
Shrill confessions barking like dogs in the night, animals brought here anything but random. A round of applause rises by the audience. Finally a truth from the diaphragm.
I could end it here, and actually that's what I'm about to do, but do not think it does not go ahead.
The story widens, I told you.
To the point of discovering that the Olympus does not exist.
Maybe the gods have always been us.
Although mortal and limited.
But infinitely funnier than puppets in the big screen.
Because we ever was to move them.