"I'm proud because we gave the children a great knowledge of the anatomy of a giraffe that they could not have had through photos," this seems to be what the spokesman of the zoo in Copenhagen declared, on Sunday, when they killed a baby giraffe on live TV before an audience of children and their parents, then dissect the animal and give it to the lions.
Here is what it creates in my animalistic fantasy...

My name is Marius and I am a giraffe. 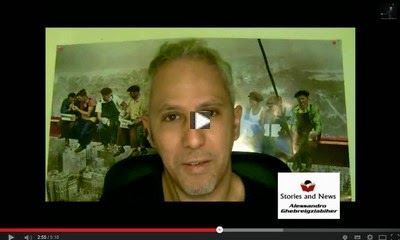 Ooops, I was.
We're on the air? The cameras are on? May I go?
Well, I wanted to add a sort of tail to my yesterday performance.
Metaphorical tail, of course.
By the way, I have one only tail.
Pardon, I had.
Sorry, this is the Jet Lag.
You see, getting in the paradise of the beasts is not like making two stops on the subway.
Where I am now is incalculably far more than the place I lived.
I lived, I begin to guess the verb tenses.
Too bad, however, it is a shame it is so far if you look at it from the live world.
If you image it.
And shame is the right word, believe me.
At least now that I've done my part for the spectacle of human morality.
I thank you, anyway.
Giving your life teaching something to children is a great way to end a story.
The problem is that there is nothing original in my departure, don’t you see?
And in the end the giraffe dies. Eaten by the lion.
Banality is the most terrible of shames, when you call a public audience.
And even if I'm an animal, I realized that the children are the most demanding spectators, speaking about surprises.
I would have understood the opposite.
Maybe with a few special effects, but do you imagine the lion dying eaten by the giraffe?
Oh, come on, we would have made a viral video.
Nevertheless, it was not the only shame.
The anatomy of a giraffe... 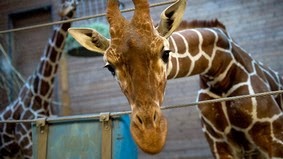 Listen, who told you that children possess the same your obsession with raw nerves, pumping muscles and especially warm blood?
I understand there are many among those kids dedicated to break toys and puppets in thousand pieces, for the right curiosity of what lurks inside, but what makes you think that everything you see is well known?
This end is just a shame.
It's a shame because I could tell you if I ever wanted to have a shorter neck. Which is a shame because actually I've never felt comfortable with this sort of oscillating speckled perch.
It's a shame because I could really show you what a giraffe may do to save his life. And it's a shame because you'll never know it. You do not care of humans, let alone the rest of us.
It's a shame because the lions are repentant of having eaten me only after the digestion. And because the lion is a lion, he eats a giraffe if this is what the script suggests, but that does not mean that once in the dressing room, no makeup, he will not cry.
It's a shame for me, if you let me say it. And it is a shame because, although I died very young, I escaped to the lions a bush of times.
I was aiming to category record, you know. Of course I did not think to end up mauled at the zoo.
It's a shame, it's just a shame that you, human beings, do not know how to write a final with a minimum of imagination.
But if you approach the ending scene without passion for the story how you will find happiness reading it?
And what about living it?