Talking Cars in USA video story: what they really say

I read that in the United States, improving road safety, engineers are designing cars able to communicate Wi-Fi through a technique called vehicle- to-vehicle, V2V in short, so that the driver is informed about arrivals by other cars even 300 meters away.
We speak about future, of course.
However, if cars could talk today, what would they say?
What would they say of us?

Early morning.
Peak traffic.
Clogged road.
The first voice arises from the confusing conglomeration of metal and smoke.
“Life is short,” the scooter says wriggling between the cars in columns.
“What do you mean?” the preceding fast running motorcycle asks
“I'm talking about your half centaur,” the former replies.
“Explain.”
“What's to explain? If he continues to drive as well as in a video game sooner or later someone opens a door straight on your snout.”
The motorcycle makes a visibly apotropaic gesture: it touches its muffler.
“Why half centaur?”
“Because if he insists in this way, no more half horse and half man. He will remains only with the second half, listen to me.”
“Well, at least the bike will be freee...” a jam-packed bus screams passed by both.
“If you're referring to the pilot, I agree,” a small car with a noticeably nasal voice says. “I cannot stand a second more with mine..”
“What are you complaining?” The bus says. “You could get it at the most... - counting the empty seats too - five, maybe six people, there. Do you see that shapeless mass of human stuff should I bring in my belly every day?”
“It will be as you say,” the little car says.
“Are you chilled?” the bus asks.
“Why?”
“When you talk it seems you have the pipe clogged..”
“No, I close it with a clip. I told you I hate the guy who guides me.”
“No...” the bus says gravely. “Don’t tell me.”
“I do.”
“You win, then. Mine are not the flowers of the field, but a flatulence concentrated in such a small space I think it's deadly.”
“You don’t know how much it is true.”
A violent car horn interrupts the conversation.
“Do we make a move?” a scintillating and rumbling car cries behind.
“Where do you want to go?” the bus replies. “I don’t even see the end of this row.”
“Yes, I know,” the big car says, “If I had my way I would throw the engine and would spend the rest of my days to rust in a nice box with sea view.”
“You're better than me,” the little car says.
“Too slow?” the big asks.
“No,” the bus replies, “too much stinks.”
“You are right. Damn smog…” 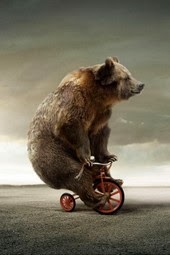 “No, you don’t understand...”
At that moment they all hear an unusual sound and every car shut down, cocking eyes and ears.
A bear slips on the sidewalk, although slowly, passing all of them.
And the unusual noise referred above is produced by the creak of plastic wheels.
You know, the tricycle is old, but still does its job.
With great pleasure, it seems, and no effort.
As if it is just a game, traveling.
Thus, in the general silence, the animal moves away to the horizon.
And the same words rise from each car.
Lucky him.
No one will ever know which one they were referring to…