No, we are not as Uganda, where a tabloid publishes a list of the top 200 homosexuals.
We are a civilized country.
No, we don’t do these things.
Telling the truth, we too have our rankings.
And what's wrong?
There is nothing bad in classifying.
The sin, where it is, concerns the object of contention.
The reasons for the primacy of one over the other.
It's all that, think about it.
For example, speaking about press freedom ranking, it seems natural to me that provokes boast to the first as shame to last one.
But these are the charts that divide.
The rich from the poor.
The north from the south.
We do not, we in the civilized country are off these contentions.
Because our freedom of the press has never been questioned.
As well as freedom of religion and freedom of expression and opinion.
Imagine the sex freedom.
That’s why we are here to strongly reaffirm that we are not like them.
Nevertheless, we are outraged and replicate the Ugandan government with our gay ranking.
Here is our top ten.
At tenth place is one that is so gay that never goes to sleep for contentment.
At the ninth position there is another one that is so gay that many are convinced he had a stroke, given the everlasting smile that he has on his lips.
The guy at eighth place is so gay crying from happiness, then laughs because he cried, and then cries because unable to stop laughing and everyone cannot avoid to watch him. 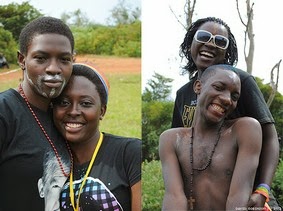 At seventh place is one that is so gay, so gay that he cannot stand alone because he instantly spreads happiness to others.
Read as an amazing human being.
At sixth place there is a guy so gay, really, because he has the carnet full until 2030.
At the fifth position is one that is so gay to sing out loud at all hours of the day and night and then was sent on a desert island because no one could sleep, but then he put a video on Youtube that became viral, and now on the shore there is a huge crowd of adoring fans.
At fourth place there is one so gay to overcome the force of gravity every second, then the next one he hits the ground, and then he wins again, and goes on like this, without stopping, up and down, and causes earthquakes, but are happiness earthquakes, then are welcome, very welcome.
The person on the third place is so gay to love everyone and everything, and then repents, because no matter how drunk by heart he realizes that not everyone deserves his love, but then he falls back, because he's too gay.
At the second position there is someone so gay to burst, but then he doesn’t explodes because he reminds of the reason he's there, at second place.
Because he knows he has the love of his life.
That is, the gayest of them all, the one at the top.
What a show, right?
This is a ranking to be proud of, dear Ugandans.
This is a record that deserves the competition.
The joy.
Yes, I know, in their rank gay means homosexual, not gay as happy.
But ours are homosexuals too.
This is the reason they are so joyful.
Because they live in a civilized country.
I would like so much to live there...