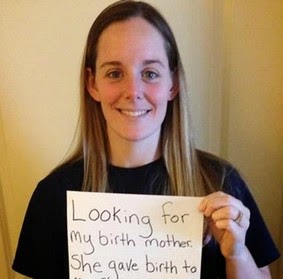 Katheryn Deprill found her mother after having spread on Facebook her desire to know her. The girl,
now 28 years old, was abandoned on September 15, 1986 in the bathroom of a fast food from her mother, who was then 16 years old, pregnant after being raped.
It happened in Allentown, Pennsylvania, United States.
It happens also that to many that wish remains just a wish.
Today story is for them...

One, is the mother.
Many, they say.
All different in many aspects, the same for the few.
But still too many, some claim.
Yet one is the mother.
Because, without exception, all children and parents on the respective banks of the river made by indifferent chances and aware atrocities came from the same mother.
Not mom.
The emotional way does not get the right idea.
Mother, or the one who generates, is one.
And the descendants are innumerable.
Sorry, but that's how things go, here.
In the unexpected incubators.
Actually, not unexpected.
Wrong is the right adjective.
Just like the bathroom of a fast food restaurant.
With a bitter and accurate consistency, don’t you agree?
There, in the place of reckless meeting and devoid of natural flavors air.
Food and life that appear and disappear in a few seconds.
A mom enters the room.
It suddenly becomes small, tiny as the slender wrist wrapped in an equally infinitesimal identifier bracelet.
Tell me, how do you want to call this boy?
Oops, excuse me... she is a girl. What name for her?
And a moment later they are two.
Two creatures of the same mother.
Because the mother is one.
Many, they tell us.
All alike in some ways, different in so many.
But still a lot, some observe.
Yet the mother is one, really.
Because all, without exception, between parents and children on both sides of a window made of relaxing dreams and childhood chasms share the same mother.
Read as the lady who should not have any family.
Let alone children.
No mom.
Only the mother.
The fear.