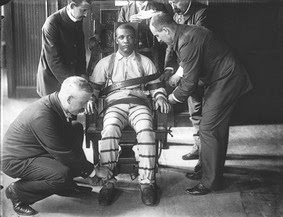 It happens in the USA that two executions are postponed because of an essential shortage.
I am referring to the lethal drug to be injected into the veins of the condemned.
So, here is the story of the blessed shortages...

I was thinking, in the meantime.
I was thinking about the fact that in a few moments, better of grueling fights to abolish an inhumane remedy to many abominable acts, there is a mere absence.
Rather than a deafening full of crowded squares, real or virtual, with petitions and slogans, progressive commercials and demanding songs.
And just thinking about the paradox of civil battles, here I discovered this was not the only miracle, but parent of a succession of unexpected surprises.
The boy, who in other billion occasions would spread into the air like corianders in the wind, due to a wrong foot on the explosive flower donated by liberator soldiers, was saved.
Yes, mine did not explode and he was saved.
Because of shortage of courage in the fate, unable to be shameful once again.
Well, a second later the miracle hesitation was repeated.
A slap or a punch.
A painful blow, where the adjective never regards the bad action’s accountable.
A man and his woman.
His.
Read it as the most abused pronoun in recent years to justify another far worse.
Of abuse.
But the story changed, at least for her.
Because a man lacked his power instantly.
Shortage of brute force, our story says, and she lived happily forever.
Well, she survived, but it was extraordinary anyway.
You know? The magic continued.
For a whole family, for him and for her, for theirs.
And for those who will come from the latter.
A shortage of voice, when one of the many chief of this world was about to declare the end of a dream called job for dad or mom.
I'm sorry, but that is the crisis, we had to make cuts, these are difficult moments, you'll see, you will find something.
You're good, yes, you are.
Perfect speech prepared to be born already dead.
That is, the fairest murder of nature, when the victim are words that really kill, forget the pen and the sword.
You're fired, yes you are.
Shortage of voice and the family was saved.
I am thinking, right now, that luck should act just like that, being more effective than a thousand prayers.
Removing, rather than giving.
On the other hand, it was so far before our eyes.
One cruel weapon without bullets does much less harm than a hundred guns against the former’s fire, as loads of good intentions...