I just read the top ten list of the most expensive towns to live. 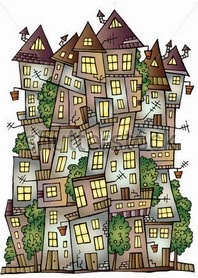 Singapore leads the ranking, followed by Paris, Oslo, Zurich, Sydney, a group tied made by Caracas, Geneva, Tokyo and Melbourne and the at tenth there is Copenhagen.
On the other hand, in my humble opinion, it all depends on who you are.
Or, speaking of money, if you're a billionaire does not make so much difference where you live, as well as penniless or unemployed people could find hard life everywhere.
However, not only money is what moves human lives, isn’t it?

Lisa is an inveterate dreamer and the most expensive city for her is the richest of illusions town, where instead Andrew found an easier life, because he did not dream even when he had every right to do it, let alone when he realized that it has a cost.
Speaking of cost, the most expensive city for George, fanatic of the present moment, is the most hectic town, where everyone runs and nobody has time for the time.
Only the for the clock that promises something beautiful in the next second.
Where Jennifer sleeps happily like a little girl who admires her favorite toy.
Never what she has in hand, always what she will have later.
Later.
And later.
Paul, poor fellow, wants to write children's stories and lives in the most expensive city in the world for people like him.
The town of the jump with eyes closed, so they call it.
From childhood to adulthood, directly, without passing through magic.
Read the latter as the much underrated adolescence.
However, in the same country Audrey has become the queen.
A sovereign who pretends to talk every day with the infant she was, unaware of having lost the essential stations, traveling on the train of life.
Those in which someone distributed a dictionary to really understand it.
The words to tell it.
The very underrated youth.
John has a gift: he looks into the eyes of others when is listening to them.
Whoever they are.
Nothing special, you say?
Well, he does that all the time you need.
Ever normal?
When you ended the speech, he is not hurry to speak and stays there, in your eyes, waiting for the rest to come out.
The fundamental rest.
And he does it all the time you need.
Now, I assume you understand the uniqueness of the man, but unluckily he lives in the most expensive place in the world for the super heroes of listening: the town of the eternally connected.
With Iphone at the edge of the supernatural or merely pathetic smartphone with serial applications, crowded social network or not social chat with very difficult to pronounce nicknames, with anything except that makes him unique.
So much underrated eyes.
Of course, for such an unfortunate guy, there are so many people in the same city, full of friends they don’t know what to do with.
Literally.
It is not easy, but I think the real fortune remains to find something or someone that, in any city you are, remains the same.
I think, maybe, it has something to do with love.