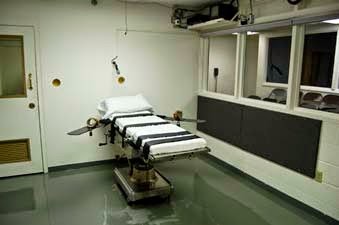 In the U.S. penitentiary in McAlester, Oklahoma, a man sentenced to death by lethal injection unexpectedly woke up and after long minutes of terrible suffering he died shouting from cardiac arrest.

We are in every story. In ours, it is obvious.
In those who we love live. Equally obvious.
In the affairs of those who we dream and admire.
Yes, we are also present there. As unexpected protagonists.
Because without us they would not have any reason to exist.
Privileged lives in the firmament of human divinity.
Very human, to be honest.
We are also in the stories of the people who take advantage of us.
Making money on our blindness.
They see it better when we raise our head, but this happens every day that passes less frequently.
Read as the much underrated last resort of unwitting slaves.
In short, revolution.
We are therefore in all the stories.
Even those who we consider incredibly alien to us.
It is so as well if we ignore them.
Imagine if we discovered them.
Because reading means tying.
The words to the mind and the consequences of them to what remains.
In all the stories, good or bad, we are there.
Standing, from behind, with open eyes or with fingers stuck in your ears, hands at work or with the consciousness hidden behind the heart.
During a lifetime, the infinity of the saints celebrated in the public square or in a horribly stretched hour stories go on stage and we follow them.
As in the last 43 minutes of Clayton D. Lockett.
We were also there, willy-nilly.
We are those who have not batted an eye because the man is a murderer, he was found guilty and the fault of the convict justifies the failure of the executioner.
We are among those who oppose the death penalty, let alone the cruel corollary to the inhumane practice of torture.
And in the midst of such extremes of an imaginary court we dance.
Taken from our personal history.
Fleeing away from it sometimes.
We are therefore inevitably jurors and judges.
The executioner.
The offender and the victim.
We are the indifferent syringe.
We swim undeterred or disgusted in the deadly liquid.
We kill.
And at the same time we feel compassion.
Because we have been in all the stories before us.
And in all the stories we've been everything.
That's why today, at this very moment, more than ever in the second that will come we may write something better.
Maybe we have to...