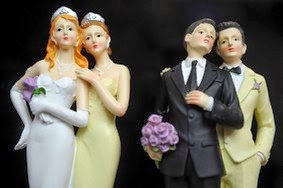 Following Grosseto’s Mayor decision to approve judging Court’s resolution about the transcript of a same sex marriage, the Italian Episcopal Conference has declared: "Marriage is the union between a man and a woman, who come stable together in a public form, with an openness to life and education of children. The attempt to deny this reality through the Courts is a jerk, a dangerous forward escape... "
That’s dedicated to all the fugitives of this world.

Here we are.
Honestly, we were here.
Invisible to most people, as the essence of our lives.
The spontaneous feeling like the suddenly color.
But this doesn’t mean we do not exist.
That we cannot suffer.
Running, only running you might understand.
Seeing really.
What to be us means.
Us, open eyelids forever.
With gaze perennially beyond what the eye shows.
Innocent witness to the mediocre reality.
Straight legs, the never relaxed muscles.
The arms in defense of what remains.
Shaking belly by courage.
And the chest as the last shield in the field.
To protect the precious treasure.
The heart?
No, we are not in a romantic novel, here.
We have never been worthy of.
But the treasure exists, it is definitely there.
You cannot expect that it can be described with two phrases, no matter how sincere they are.
Yes, it's true.
We're on the run.
Since our first cry, that was silent.
The breath in the throat was too much sine then.
Fast creatures.
Read it as the escapees from the world of slowness.
Here we are.
We are there.
Well, we were, there.
Delicate shadows among the horizon's mirages.
Forward, as far forward as possible, we go.
But it is not a choice.
It never was.
Being born and run.
Only living is.
Just like let live.
Happily.
The others...