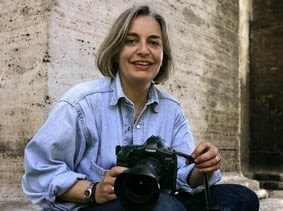 The German journalist of the Associated Press, Anja Niedringhaus, 2005 Pulitzer Prize in Breaking News Photography, was killed in Afghanistan.
In recent years, the woman brought her camera in many places where war and internal strife have left behind suffering and poverty.
From Afghanistan to Iraq, from the Gaza Strip to Israel, from Pakistan to Turkey.
These words are for her…

Yes, they are important.
They must be viewed with care.
Taking all the time.
Because between aggressors and offended there is always space.
Sufficient space to do something.
Even putting an end to the carnage.
However, to do so we need to understand.
We need to see.
Well, run, Anja, run and shoot.
Actually, no.
Stand still where you are, very still.
Because this time needs a steady hand.
Or maybe because sometimes deserving attention life comes to you.
Does it sound easy, telling so, right?
It is not.
It's never easy to be found in your house, where the truth is knocking on the door of your home.
Because it really takes courage to build it where the former lives.
The so overlooked truth.
Of the images.
Yes, I’m talking about them.
In the world that has made them as the most deadly weapon of distraction.
Mass distraction?
No, the individual, just the individual.
Detaching him from the essential, his similar one and vice versa.
Well, those images are not worthy of the name and Anja has always known.
As well as a hot embrace stolen by an accomplice paparazzo, to give luster to the nth alleged celebrity, deserves no comparison with also the shortest moment of intimate encounter between two purely disinterested bodies.
Read as to really make love.
Now the album of captured stories reached the end of its days.
A single snapshot seems now head on the others.
Your picture, Anja, possibly with the camera, in plain sight.
However, if this is the time of remembrance, then we’ll remember what we could not see through your eyes.
The countless remnants of lives in motion, that invaded your mind as your heart, surviving the flashes.
Not less true than the others.
Quite the contrary.
Goodbye to you, Anja.
And to all the valuable missing photos...