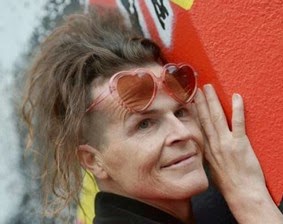 The news comes from Australia.
As you can read on Internet today, Norrie’s request was granted by the High Court, while it was denied by the registrar.
The right not to have any reference to his gender on the identity papers.
Norrie was born male, after became de facto female, until reaching the recent conquest.
Neutral.
So, here is the minor anecdotes' story…

Once upon a time there was a man.
Actually, no.
A woman.
Or maybe I'm wrong again?
Okay, that is not essential in the story.
I go on.
Once upon a time there was someone.
There was...
If I say was, though it is common way, could mean that someone is no longer alive now.
How should I know it? How could I be sure about this? I have no idea how the story will finish.
If I knew, what fun would I have telling it?
So, from the beginning.
Once upon a time there is someone.
Once?
Why limit myself already in the incipit?
It is not wise, indeed, it is not forward-looking.
It could affect the best route, that would drive the narrative toward desirable destinations for those who yearn to successfully storytelling.
Read as the remaining pages.
Okay, let’s start over.
There is someone.
Someone is going somewhere.
What did I say before?
No limits, especially at first.
There is someone going everywhere.
And suddenly someone meets her...
Oops, I did it again.
Try to understand. Meeting a girl is what shakes the plot, to me.
But what am I here?
Nothing, it's not my story.
I must not make this mistake.
Worse, this pity.
Fairly widespread, indeed.
Convincing ourselves that everything happens around us.
I immediately remedy.
There is someone going everywhere.
And suddenly someone meets someone.
Great, now it works perfectly.
Because everyone can be protagonist.
And no one could be excluded.
From the story…