Turkey mine disaster video the below lives story 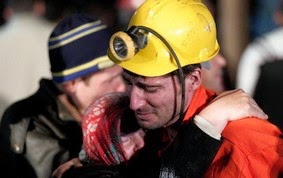 Near the Soma district, in the north of Turkey, an explosion caused the death of at least 234 people, including Kemal Yildiz, who was only fifteen years old.
Two thousand meters deep hundreds are still trapped.
Unfortunately for them, these are the only times when we remind those people…

The below lives.
This is our job.
That is our responsibility.
Willy-nilly.
Because this is the light that remains, to the rest of us.
The only horizon granted.
Because there the possible existence stands, between the better lines.
Because there our jewel lies.
A gem called survival.

The people of the dark.
Human ghosts for the crowded squares on Sunday morning.
And for the streets of downtown clogged with onlookers at the windows.
Read as the unsuspecting dance of wasted fortunes.
We are also harmless vampires that suck one blood type.
Our own, unlike many other monstrosities.
And we are them too, the real zombies.
Creatures on one single dimension movie.
That’s what remains outside of the screen.

The heroes in the white.
Exactly, contradicting the previous one.
Strengthening it, paradoxically.
Because this is what we are.
People of the dark invisible heroes of the ignored space.
That is, the white between chapter and chapter.
Among paragraph and paragraph.
Between verses and chorus of a deaf song.
Unable to hear the melody, let alone the noise.
That comes from below.

Here we are again, the below lives.
We earn the dignity of existence giving all.
The perfect sacrifice.
The spectacular action.
And the moving scene.
All in the same frame.
Blessed or cursed explosion.
The only way we have to remind the world.
That below.
There is life.
Not only death...