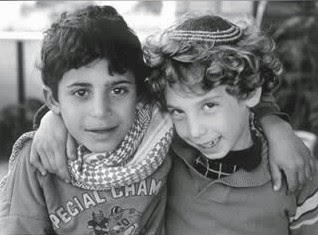 Imagine a stage.
The screen of a cinema.
Or even the pages of a book.
In short a show.
A story told over again.
Always, even when you do not listen.
Especially at that time.
One of those slow plots, which can be resumed at any point.
And you do not have any difficulty in recapture the thread of the story.
Call it war.
Stories of travel and war, the only two possibilities, so it seems to work.
Here we have a war.
Because everything can be but a trip, this time.
It’s hard to travel when you are a prisoner in a scrap of land surrounded by a wall hardened by determined and obsessive hatred.
However, if the stories are trips or wars, only the former really tell something new.
A trip generates emotions and places, a child becomes a man and a woman becomes a child, and whether or not we return home, tomorrow everything will be different.
On the contrary, the war is a false narrative.
It consciously does it, even if it suggests ideals or reasons to justify the next scene.
Characters can change, the role as the jacket.
Indeed, as in our case, having been victims, oppressed and murdered in a century, they may become victimizers, oppressors and mass murderers in the next one.
They can change weapons, depending on what the market offers.
They can change the strategies and tactics in battle.
But the story does not really changes is the usual illusion of words and sounds, images and colors.
Because death is the beginning and the end.
It’s written in the headlines as the tail.
Death of innocent people, the so-called civilians, women and children.
Yes, even the warriors, the contenders, often die.
But for sure who will pay the highest price are always the same.
Read as well as the sacrifice of the characters with the brief script.
This is the reality of an old story.
If it is not a journey, war is inevitable.
Imagine again the pages of a book.
Better, a stage.
Or, if you prefer, the screen of a movie theater.
The actors are there, they kill or die, without alternatives.
Nothing changes, if you turn around or go to the bathroom and come back to your chair.
War.
This is a story that really never changes.
Because this is a story that has only one final we've seen too many times.
Death of the innocent.
Unless the reader will tear the pages, for once rightly.
Unless viewers do not cut the screen in pieces.
Unless the public will stop being just the audience.
Going on stage and saying enough is enough.
Like in the past, today, now, only us, witnesses of this terrible spectacle, can change history.
Because otherwise, they, will not stop.
Only this way the story of the war can become the story of a journey.
Towards peace.