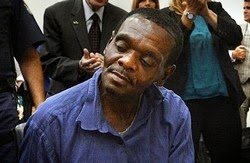 They watch silently.
Somewhere, out there.

They are observing Henry Lee McCollum, 50 years old, on the road again.
The last 31 years spent in prison, sentenced to death.
He’s innocent.
Because in 1983 he was just a boy.
Perhaps unfortunate because black.
Or just poor and uneducated.
Who knows.
The sky, the earth, or whatever you pray, bless DNA testing.
Which brings light to a life.
Stolen youth and an infinite number of moments.
Maybe not all serene.
But potentially good.
And for the poor and unwell educated of this world serenity is the real black gold.
Black, again, an often used color when talking about injustice in the so-called free world.

They read.
They listen, without comment.
Somewhere on this planet.

And so they learn that Henry said he did not feel any anger.
That after all these years taken with impunity he does not have anger in his heart.
The story spreads in a few hours on the media.
"There are still innocent people there," Henry says. "There are people who do not deserve the death penalty. It's not fair. We must do something for them... "
That's why it is not the first and not the last of such news.
Think about it, the press is full of such unpleasant tidings.
Read them as well as the normal inhumanity of the quiet life.

They know.
They know everything.
They understand all, where they live, more or less hidden.
They are not surprised by what instantly earns the home page.
Because they are accustomed to the rules of the game, just like the rest of us.
Henry Lee McCollum does not feel anger, he says, and he continues on his way, under the sun again.
I hope the best fate to accompany him on the street.
Look at him, there in the background.
He vanishes on the horizon.
Fade.
Now we cannot say to have not seen
We have read and understood.
Exactly like them.
The eyes of the killer.
O killers.
The real culprit, and all those who have allowed, facilitated and invoked the theft of life and stories.
Of noble innocent creatures without anger.