Diversity Stories: Us and Them

"Italy has wasted the opportunity to give the EU a different address, based on respect for human rights, fight against discrimination, and in particular on policies on immigration issue that gave priority to saving lives."
These words are from the general director of Amnesty, accompanying the publication of the usual annual report about human rights.
This year is even more tragic than the last.
That is the usual problem of us.
And them...

Once upon a time there was the land of us. 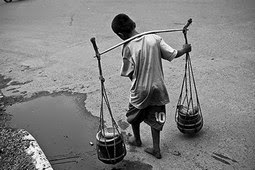 The land of us was inhabited by people whose names were easy to pronounce.
Me, you, myself, me again, always you, me too, what about you?, and so on.
Outside there were them.
Their names were not easy to pronounce.
According to us, obviously.
He, she, the others, all the other ones, that guy, that girl, these guys, go away and come back to your land, etc.
Now, I have to say that many of us were not nice with them.
The reasons are many and I will not narrate here.
A single story would not be enough to change things.
Even if written in easy words.
Clear and direct.
Reading in a few minutes.
Otherwise, all those who could read would find sufficient air in the brain to allow the heart to enter.
And breath.
I will focus only on one.
You have to know that people in the land of us were afraid that them could steal something.
Anything, even the most unlikely, such as the future.
That is, what does not yet exist.
However, due to the suggestion of some delusional idiot, many were convinced that the best way to prevent them from robbing us were depriving ourselves the best we had.
As if a flower would give its pollen away to prevent the bees to collect it.
As if the earth itself could ruin its fruits against the living creatures.
As if the whole dance was reduced to giving and taking, ignoring the natural next step: giving back what has been taken.
So it happened to all, in the kingdom of us.
There were those who lost love and imagination, sense of humor and understanding.
There were those who gave up to have a word and even those who forgot of being able to listen others word.
There was even someone who eliminated from his life the way that takes on another way.
Can you imagine what pain in the ass seeing just one horizon till the death is?
Everybody severed personal part the most worthy to exist, but the majority agreed to loose incalculable gifts from the past.
Privileges wrapped at the price of dreams and blood, for love of us in the future.
The human rights.
It was the deprivation that better worked.
At least once.
Stop with the right to food and the right to protect from rain and cold, stop with the right to care and the right to hospitality.
In short, stop to the right to exist and it became easier.
Indeed, more than easy, it became natural.
Ignoring, raping, torturing, discriminating, sacrificing.
Them.
However, the problem is that forcibly removing everything many of us were not able to remember what to be me was like.
So, many became convinced that the meaning of me were us.
And all the others became ignorable, expendable, discriminated, etc.
Because all the others that were not me had become them.

Read other stories about diversity.