It seems that in China every year twenty thousand children are abducted.
Xiao Chaohua’s son disappeared in 2007 and since then the man has never stopped going around with an RV covered with photos of the kid, nurturing the hope of finding him.
Even at the cost of just having feed an illusion.
That is, a clear defeat... 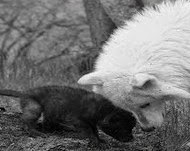 Let’s say I have lost, dear son.
That I'll never win.
That the most I will get is the compassion for another crazy guy in the world.
Infected by an obsession, crazy like many others.
To embrace you.
Worshiped needle confused in the saddest haystack.
Woven with twenty thousand broken dreams.
Let’s that this is the way life goes.
That crazies are just crazies and living a long time means solid land under the feet, deep pockets and skillful hands.
Grasping the graspable, nothing but wonderful ghosts.
It will mean that thing will only get worse for me.
I know well how it works.
Attending fantasy’s frustrations you end up accustomed to falls and the day when the bruises no longer hurt finally comes.
The fire does not burn anymore.
And the frost does not touch you.
Because inside there is no longer anything to freeze.
Let’s say I had already lost everything at the very beginning.
Even before your departure for oblivion.
Even in one of the many vigils of your coming to the world.
Let’s assume it was all already written.
Winners and losers.
Alive and crazy.
And all the others across the river: the dead.
That is, the crazies who have at last understood their death.
Yes, let’s say I was born without any chance of victory.
That there are many who will certainly lose.
Always lose.
Ever last.
Surely surmountable.
Inevitably vulnerable.
Let’s admit your father is one of them.
The most beatable.
The one who will be overwhelmed even if every opponent will do everything to give him a free shot.
Let’s say that what the most sadistic of the fates have decided for us will be true.
So, I will walk near you unable to recognize you.
You look at me the same.
Watch me as I now dream you.
And steal even a millisecond of unhappiness to your crazy parent.
Despite the nature of the world.
In spite of the inhumanity of the latter.
Despite me.
To whisper.
I 'll be fine, dad. And I will be happy.

Read other stories with morals.