The migrants and the polar bear: the true story

After decided to cross the Eurotunnel and reach the UK, four men climbed onto a truck in Calais, France, and found a polar bear in a cage.
One of them escaped, while the three remaining were then arrested.
The animal, named Nissan, arrived later at its destination, a Yorkshire park, to join two other bears, Victor and Pixel.
This is the story that Nissan told them…

Once upon a time there were three migrants. 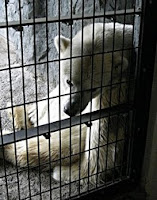 The three migrants were actually four.
In fact, to be honest, I have no idea if they were migrants.
Or in any other way humans love calling each other.
Distinguishing.
At worst, estranging.
Four of them have got on board.
And only three are left.
Too bad, I thought.
Who knows what the fourth could have said.
Well, as you know, we bulky souls, who travel from pole to pole of the planet only reluctantly, we are always there with our mind.
On the empty chair in the classroom and the blank place in the crowd.
On the lacking horizon.
Anyway, I settled.
Three better than two.
Imagine how much better than nothing.
"Come on, I'm listening," I said in our language, the one that tell as much as little hope is.
To be understood.
But the eyes do the rest, as mom said and, I don’t want to brag, I have two chatters eyes to deafen a crowd of yelling teenagers.
Nothing, not even a breath.
Maybe the one who had something to say was just the missing fourth in the band?
However, observing the three faces with the proper attention I read the unexpected.
Fear.
But even staunch courage.
Tiredness.
But also indomitable willpower.
Sadness.
But even a strange kind of optimism.
The one of creatures who designs light ahead despite the longest night of the year is just began.
Why?
I wondered and still wonder.
Why?
What was the reason of that fear and that fatigue?
Why that sadness?
Maybe because unlike them we are white?
Or maybe for what many said about us?
That we could hurt them?
The truth is that they and only they are the free ones.
Now we are in a cage, but once you were like them.
The real problem of this world is…
All the others.

Read other stories of immigrants